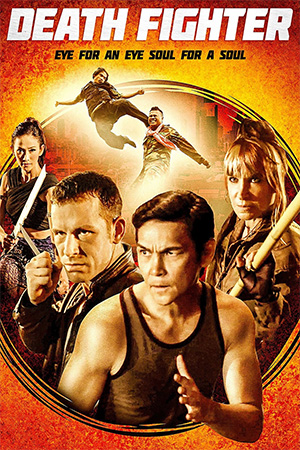 After a human trafficking bust in Thailand goes horribly wrong, police officer Michael Turner (Mullins) witnesses the murder of his long-time partner and mentor, Conrad (Lewis). As he attempts to track down the man responsible, Turner quickly learns that he is being targeted by both sides of the law. Despite increasing pressure to leave the country, he manages to enlist the help of an ex-military mercenary (Wilson) who shares his grudge. However, their quest for justice soon brings them face-to-face with a band of notorious criminals and both men start to wonder if the challenge may be more than they can handle.

Originally filmed in 2012 but shelved due to legal issues, ‘Death Fighter’ is a low budget actioner helmed by former Eastern Heroes co-founder Toby Russell. Shot on location in Thailand, it’s clear that the film was hoping to capitalise on the booming popularity of Thai action cinema.  Sadly though, it feels a lot more like a PM Entertainment outing rather than ‘Ong Bak’. Littered with numerous obvious action movie cliches and more than a handful of hammy dialogue, the film is a lightweight effort that often struggles to pad out the already limited running time. All of the characters are about as predictably flat as they come, and there’s even an awkwardly tacked on romance just to make sure every box gets ticked. As for performances, Mullins is utterly forgettable as our hapless hero while Rothrock and Velicitat are both short-changed for screentime. Wilson is the only real plus as he puts in a solid turn as the alcoholic mentor, but even he is quickly let down by his character’s shoddy backstory.

When it comes to the action, this is where ‘Death Fighter’ really lives and… well, dies. As I mentioned in my review of ‘Bloodsport 2050’, Mullins has some decent moves and could be a solid on-screen fighter in the right choreographer’s hands. While Kazu Patrick Tang has done some good work on other films, ‘Death Fighter’ will not go down as his finest hour. The real problem is that the action feels overly staged, with combatants clunkily standing around waiting to unleash their big move. You can also often see when the hits don’t connect and the editing randomly cuts mid-move making the fights feel choppy. However, it’s not all doom and gloom as there are still a couple of high kicking highlights from Mullins, and Prasit Suanphaka, who seems to have no other credits to his name, is highly impressive during all of his bouts.

‘Death Fighter’ is a cheap mishmash of muay thai and action movie cliches that never quite manages to hit the spot. It’s nice to see Wilson and Rothrock back in action and there are some flashes of talent in amongst the fight scenes, but none of it is ever quite enough to overcome the film’s obvious faults.