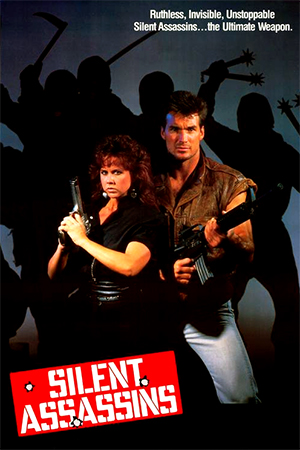 Flash Gordon, the girl from ‘The Exorcist’, a Playboy Playmate, the one from ‘Best Of The Best’ that wasn’t Eric Roberts and some dude called Jun Chong: yep, ‘Silent Assassins’ is B-movie gold. Well, almost. East meets West in this 80s trash gem that also finds time for a ridiculous over-the-top (rose sniffing!!) villain, a surprising amount of gore and ninjas. Oh yes, ninjas. Said ridiculous villain and ninjas kill a bunch of important people and then kidnap some elderly scientist (and bizarrely a little girl as well) and hold him hostage and torture him so he will reveal some kind of secret formula, or code, or recipe for unlimited energy, or something! It’s then up to Sam Jones (‘Flash Gordon’), Phillip Rhee (‘Best Of The Best 1-4’) and some dude called Jun Chong to kick ass, rescue the hostages and go all 1980s on us. Oh, and the late great Mako also pops up, for some reason or another.

Low budget, trashy and obviously cashing in on the 80s fascination with martial arts and ninjas, ‘Silent Assassins’ is bad but also quite fun. Sort of fusing a buddy cop movie with ‘American Ninja’, ‘Silent Assassins’ features all kinds of absurdness: a Playboy Playmate who is supposed to be some kind of scientist; quite possibly the lamest bad guy ever; Mako taking a jacuzzi with Sam Jones and some dude called Jun Chong; Phillip Rhee having a hoot as a rich cool dude who also happens to be ace at fighting; and the ongoing domestic disputes between Sam Jones (who’s character just happens to be called Sam Kettle: oh dear!) and Linda Blair. In fact, there is no real reason for Linda Blair to be in this film as all she does is beds or falls out with the hero. Sam Jones pushes the cheese factor through the roof, some dude called Jun Chong can’t act and good old Phillip Rhee is a riot.

Now if you are in the mood for some low budget action then ‘Silent Assassins’ has a lot of it. Never slow moving, the movie is packed with shootouts, limb severing fights, black clad mask wearing bad dudes causing havoc and a bazooka that never needs reloading! While the action is never overly intricate or spectacular, the fights are certainly punchy and energetic and Rhee has an awesome scrap with some bad dudes in the action packed finale. As mentioned, the gore quota is pretty high with hands and heads chopped off at regular intervals and one poor victim gets blown apart by a bomb strapped to his chest. On top of that, bullets can be dodged by simply doing a forward roll (!) and Sam Jones even super glues a guy to a wall so he can interrogate him. Brilliant.

‘Silent Assassins’ gets a couple of stars as its got enough Eastern flavoured action to keep it rollicking along, a bunch of B-movie stars hamming it up and is perfect fodder for some low rent action fun.