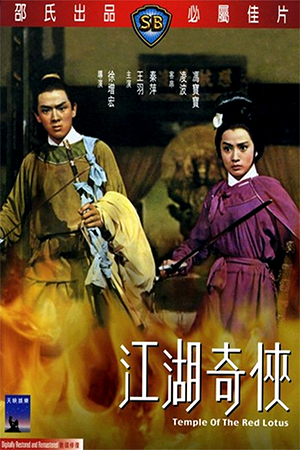 As is widely reported, ‘Temple Of The Red Lotus’ is one of the milestone productions that helped shape a new era in Hong Kong cinema. Bringing the swordplay genre into the modern age, this Shaw Brothers production helped open up the way for King Hu’s superlative ‘Come Drink With Me’ and a whole host of lesser works.

On his way to the home of his betrothed, swordsman Wu (Yu) is severely beaten by a gang who he believes to be bandits. Saved by the legendary Red Lady, Wu is healed of his wounds and completes his journey to the family residence of Dragon Jin – his future father-in-law. As Wu and his bride-to-be Liang get to know each other better, the family continue their on-going war with the villainous Red Lotus sect. Unfortunately, Wu discovers that his earlier assailants were in fact the family he is about to marry; deducing that they are all bandits, Wu resolves to leave with his new wife and disown his new in-laws. The family rules state that Wu and Liang are not allowed to leave the home though and the newlyweds are forced to fight their way out.

It’s always difficult separating a film from its historical importance. In the case of ‘Temple Of Red Lotus’, while its importance in terms of Hong Kong cinema is undeniable, it is hardly a memorable experience. It’s a telling fact that ‘Come Drink With Me’ was made a mere year or so later and hasn’t aged while ‘Temple Of The Red Lotus’ has all the faults of an archaic curio. While King Hu’s film remains as impressive as it must have appeared on its initial release, ‘Temple Of The Red Lotus’ shows some worrying wrinkles and unintentional distractions. The argument some may present is that comparing many early swordplay films to ‘Come Drink With Me’ is fatuous; however, even compared to ‘Magnificent Trio’ – a slightly later Wang Yu effort – it is found wanting.

Some of the weaknesses of the overall effect of ‘Temple Of The Red Lotus’ lie in the inconsistent storyline. Even though the eponymous Red Lotus temple is constantly mentioned, it is only a happy coincidence during the final ten minutes that affords viewers the chance to actually see it. Alongside this slightly misleading aspect, there’s also the fact that the narrative appears a touch too theatrical; the construction of the scenes and the general outworking of the plot is patchy, episodic and seems to have more in common with the conventions of Chinese opera than cinema. The source material will undoubtedly account for much of this, but it still doesn’t fully justify the awkward transition to screen. Events sometimes seem to have very little to do with the scene that preceded it – a certain distraction.

Action-wise, ‘Temple Of The Red Lotus’ is competent, but slightly repetitive. The choreography tends to focus too much on the hero/heroes being surrounded by encircling villains then flailing sword or outstretched leg towards them. After a few instances of this, it quickly becomes tiresome. Therefore the needed tension that should arise when the character of Wu is faced with fighting his in-laws’ diverse skills is lacking. Nonetheless, the non-action scenes that feature Wang Yu and Chin Ping are a compensation; the nervy, naive and charming romance between the two is one of the few definite merits in the production’s favour. Wang Yu would later make a career out of playing stoic heroes faced with incredible tragedy, but on the strength of his performance here this seems a shame. His vulnerable hero is often more empathetic than the robotic avengers he sometimes played.

At the end of the day, ‘Temple Of The Red Lotus’ works as more of a historical artefact than a genuinely exciting swordplay feature. That’s not to say that it doesn’t have its moments; there’s certainly good performances within the film and the aforementioned chemistry between Wang Yu and Chin Ping. However, this is a production that seems prehistoric in comparison to what was to follow a mere year or so later – it retains a certain charm, but the sands of time have not been especially kind to the finished article.