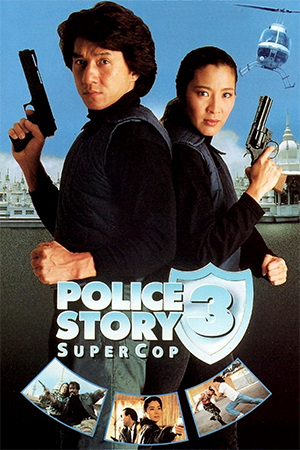 A lot was expected of Jackie’s 2nd sequel to his favourite film: ‘Police Story’, and the directorial reigns were surprisingly handed over to Stanley Tong. Younger than Jackie, it was only the former stuntman’s 2nd film as director, and as part of taking the job, he insisted that the movie be shot in synch-sound. Prior to this, all Jackie’s films had been post dubbed by a different voice actor.

The style of the film is certainly different to the first two parts, having a more international feel, being shot all over south east Asia and incorporating various languages. The action is also different, moving away from lengthy fight sequences to shorter, more westernised stunts, gunfights and explosions. Fortunately, with Jackie still in great shape, we do get to see him pull off a few nice punching and kicking combinations, most notably against Sam Wong (Body Weapon choreographer, and former Sing Ga Ban member) near the beginning of the film.

Much has been made of Michelle Yeoh apparently upstaging Jackie in the action stakes, however, while she is certainly impressive, I still feel that Jackie comes across best in most of the scenes. Everything we have come to admire about Jackie is there: the power, skill, emotion and comic timing, making this possibly his best modern day actioner of the 90’s – or at least after Operation Condor. I would have like more hand-to-hand action towards the end, especially from Yuen Wah, but what we do have is thoroughly entertaining.

A follow up film with Yeoh as the lead was filmed a couple of years later titled ‘Project S’. In the west it is commonly referred to as Police Story 4 – but is more of a spin off than a true sequel. While it certainly features some great performances and a few action highlights, it could have done with Jackie’s expertise in the fight choreography. If those were improved upon, it could have been a more worthy addition to the Police Story name.

In all, this is another great slice of entertainment JC style, and was one of his best performances before his physical shape noticeably began to deteriorate in the mid-90’s. Not up to the standards of the original, but worth seeking out nonetheless. Especially since Disney own the rights and have done their usual cutting and dubbing job, thereby ruining another classic.