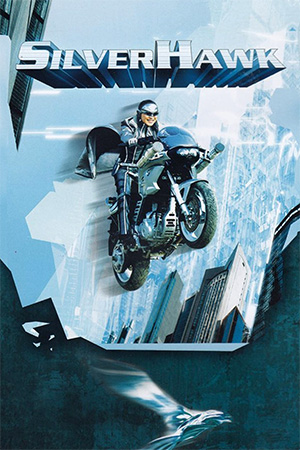 The one thing that has to be detached from the mind before viewing Michelle Yeoh’s ‘Silver Hawk’ is the bitter taste left by ‘The Touch’. Although the critical and commercial reception of this new action film have been far from positive, the memory of Yeoh’s previous disaster prove to be the main obstacle to entering into this review with an open mind. The only thing to be said at this early point of the review is that ‘Silver Hawk’ is better than ‘The Touch’…

Wealthy heiress Wong Lulu (Yeoh) is known throughout her home city as a celebrity and investor in new technologies. While this side of her is well known, the side that remains hidden is that of the ‘Silver Hawk’ – a masked vigilante who fights crime while also evading the suspicious police department keen to capture her. Brought in to deal with the irksome crime-fighter is self-assured police officer Man (Ren) who grew up with Wong, but has no idea that this demure millionairess is the superfighting Silver Hawk. Man continues blissfully unaware, but finds that his investigation into a kidnapped scientist brings him into regular contact with his childhood sweetheart in one of her guises. As the trail leads both Man and Silver Hawk to criminal mastermind Alexander Wolfe (Goss), the cocky law enforcer begins to uncover the real identity of his caped adversary.

It may all be relative, but ‘Silver Hawk’ is a far more competent film than Yeoh’s other foray into big budget heroics. Such a statement certainly doesn’t mean that it’s a great film – it may not even be a good one – but as the end credits rolled I was at least pacified by the fact that it entertained, after a fashion. Nevertheless, these minor commendations do not excuse the cliché-ridden, Hollywood-ised nature of the film. In all its delusions of grandeur it foolishly decided not to put any excitement into its set-pieces and ignored the concept of logic in its storyline. Though the latter can be forgivable for a straight action film, the former is a far more worrying weakness.

‘Silver Hawk’ is the perfect example of the ennui that has swept Hong Kong action films and, to a wider degree, martial arts choreography. The time was when a director would leave his camera specifically focused on two or more superbly choreographed performers and allow the viewer to enjoy one long take free from any gimmickry. Now, unfortunately, it seems the intention of film-makers is to put their own obsession with slow-motion and quick, blurred cuts to the fore instead. This turns potentially interesting fight scenes into uninvolving distractions. ‘Silver Hawk’ does have a few better moments; the clash between Yeoh and a gang of bungee-corded attackers is more enjoyable than expected and offers a few nice moves. Nevertheless, though there’s far less of the ghastly CGI that marred ‘The Touch’, ‘Silver Hawk’ still continues to remind the viewer of the chasm between the choreography of the 80s/early90s and today. It’s such a shame that modern directors seem incapable of marrying together big budgets with the kind of wondrous imagination that made the Jade Screen so enticing.

Another major problem with ‘Silver Hawk’ is that, like ‘The Touch’, the plot is obviously a rehash of every big budget storyline of the past twenty years. World domination, kidnapped scientists and cyberpunk assassins (not to mention the mind-numbing trance soundtrack) are either the stuff of low-brow parodies or B-movies, not aspiring blockbusters. The antagonists lack any real menace therefore making the heroes’ exploits redundant; a superhero film these days needs meaty villains to work and, despite Luke Goss’ best efforts, this simply isn’t the case here. Add to this the annoying need to appeal to younger audiences with inane techno-babble and achingly hip supporting characters (included in this bracket is Yeoh protégé Brandon Chang who is only marginally better than he was in ‘The Touch) and ‘Silver Hawk’ is clearly in trouble.

‘Silver Hawk’ earns three stars despite my previous tirade. The main reason for this is that the special effects are better integrated than was expected and Michelle Yeoh tries so hard. This probably isn’t a recommendation in its self, but Yeoh and co-star Richie Ren try to inject a bit of life into the limp production. Ren’s self-deprecation is appreciated while Yeoh pulls off the mixture of charm and physical moves very well. In light of this, and Hollywood’s recent success in making superhero films exciting and ‘realistic’, ‘Silver Hawk’ is a major disappointment. The unfortunate twist is that while Hollywood looks to Hong Kong’s previous lower budgeted classics for inspiration, modern day Hong Kong action flicks have completely forgotten them and continue to squander their relatively opulent production values.