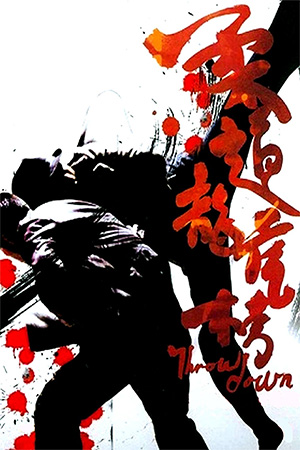 In his current period of exaltation, Johnnie To can turn his hand to nearly any genre and come up with something that feels refreshing and original. In light of this, when To tackled what could best be described as, on paper, a ‘sports movie’, it was always likely to be very different from the norm.

Once a Hong Kong’s greatest Judo champion, Sze-To (Koo) is now a craven layabout who manages a bar, but drinks his way through the profits. One evening, the fallen idol is challenged by swaggering Judo fighter Tony (Kwok) who marches into the bar with unusual presumption. When he sees Sze-To’s dissipated state, Tony agrees to bide his time and wait for the appropriate moment to realise his dream showdown. Tony meanwhile contents himself with a job as a jazz saxophonist at the bar and tries to involve himself in Sze-To’s fractured life. Joining the listless pair is aspiring singer Mona (Ying) who helps her new boss in his hare-brained scams and ludicrous gambling excursions. While Sze-To barely keeps his life in order and constantly manages to tangle with the local gangsters, old Judo rival Kong arrives on the scene also keen on engaging in one final match-up with Sze-To.

The euphoria surrounding ‘Throw Down’ had been infectious enough to push it to the very top of my ‘must-see’ list. While some have claimed it to be among To’s most accomplished works, others have praised its deconstruction of the traditional ‘sports movie’ – it’s certainly not the typical ‘Rocky’ presentation of events. Despite these views though, I couldn’t help feeling that this was, at its best, a flawed work by a director whose own standards have become insurmountable by his previous triumphs. There’s a great deal to admire in ‘Throw Down’, but not enough to truly be enraptured by.

‘Throw Down’ is a peculiar hybrid that combines the twilight world of Johnnie To’s film noir thrillers with an obvious ode to Kurosawa’s ‘Sanshiro Sugata’; in the hands of a lesser film-maker this would simply be fool-hardy, but To’s current resurgent confidence means that nothing seems out of his reach. As with Kurosawa, To uses Judo as a metaphor for something far greater and more meaningful: hope and redemption. Every character in ‘Throw Down’ has a desire to prove themselves whether it be Mona – who desires to find fame in Japan – or Sze-To, who is grasping for some kind of meaning in his imploded life. Such a lofty ideal is again something that Johnnie To has little trouble achieving, but while its thematically successful, it is still shallow at its core. Characterisation should by the fulcrum of ‘Throw Down’ or any film that aspires to the topic of redemption, but it is undermined by a few languid stereotypes and situations. This is especially the case with Cherrie Ying’s portrayal of Mona, a character whose quirks and motivation leave the viewer with a distinct feeling of deja-vu.  Mona is the puerile, starry-eyed waif who wanders into so many Hong Kong productions and ruins just as many; Charlene Choi and Faye Wong before her seemed to have patented that awkward kookiness, and it’s no less frustrating in Cherrie Ying’s hands. Meanwhile the secondary characters are not much better off; Sze-To’s apparent fall from grace is left tantalisingly unexplained and leaves a huge emotional void in the storyline. Of course, while lesser productions would be condemned for this, To’s stylish story-telling is seen as a way of excusing these faults – and in my opinion it doesn’t.

While the flaws may be the subject of debate among viewers, the performances – which are uniformally excellent – are not. Louis Koo is a little too young to play the battle-hardened Sze-To without some concerns, but his efforts are mostly superb. In a year that has seen him lampooning Samuel Hui in ‘Fantasia’ to a winning ‘nerdy’ role in ‘Love On The Rocks’, Louis Koo has grown in stature and range. The underwritten character of Sze-To is given an injection of pathos by Louis Koo’s superior handling of the material. Aaron Kwok, Tony Leung Kar Fei and Jordan Chan provide fine support for their charismatic leading man.

Johnnie To’s ‘Throw Down’ is peppered with artistic flair, helping to paper over a few of the more obvious cracks. One such scene – an example of Johnnie To’s boundless confidence with the medium at this moment – is when each of the three main characters is being quizzed at a separate table in the jazz bar; intercutting three diverse discussions while letting the camera swing between them is a triumph of editing and directorial insight, even though it proves to be a tad too awkward at the end. Nonetheless, To floods the frame with detail and exquisite lighting, making the world he began to flesh-out with ‘The Mission’ and ‘PTU’ even more resonant. Though the eventual failings of this ambitious film are apparent, it’s also obvious that Johnnie To is a talent that Hong Kong will be eager to retain in spite of an expected Hollywood enticement.

‘Throw Down’ houses a performance from Louis Koo that is one of his best, a charmingly taciturn Aaron Kwok and Tony Leung Kar Fei who, even in his small role, is admirable. It also tackles a difficult, oft-told story with a few moments of genuine insight and underlying power. However, its failure is in its refusal to involve the audience in its drama; one thing that Kurosawa had down to a fine art was the ability to turn even the most personal and thematically challenging films into works that engulf the audience. It may be To’s intention to slightly alienate the audience with characters stuck in limbo, without any explanations, but, if this is the case, he cannot be too surprised to learn that this is an uninvolving film. ‘Throw Down’ is a drama that needed a human edge – instead it is as lost as its leading character.