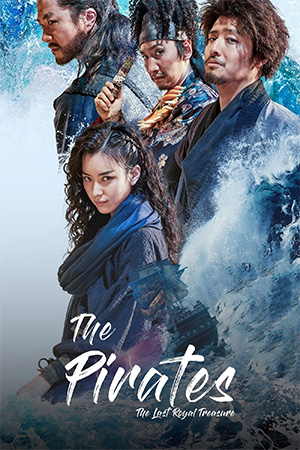 A partial sequel to 2014’s ‘The Pirates’, Kim Jung-Hoon’s ‘The Pirates: The Last Royal Treasure’ gets the big-budget Netflix-exclusive treatment. With enough computer effects to make a ‘Pirates of the Caribbean’ film seem tame in comparison, this is another confident step for Korean cinema. Whether or not it is a memorable feature is a different matter though.

Dishevelled bandit Wu Mu-Chi finds himself and his followers ‘rescued’ by a ship operated by pretty, but determined pirate queen Hae-Rang. Once there, Wu Mu-Chi is cajoled into joining his new crewmates’ quest for legendary imperial treasure that is said to exist on a mysterious island. Wu finds that being Hae-Rang’s underling is not all that appealing, but after a few attempts to take over, he soon becomes aware that the pirates and bandits will have to work together to succeed. Meanwhile, ruthless Bu Heung-Su and his well-drilled army are also close to locating the treasure and will happily kill anyone who gets in their way.

‘The Pirates: The Last Royal Treasure’ is a big, unapologetic action film that borrows all of the pomp and bombast of its American contemporaries. That, of course, means that you get many of the same strengths and weaknesses of its glitzy forerunners. On one hand, you get a slick, attractive looking film, colours popping off the screen and copious spectacle filling every frame, while on the other you eventually get left with a slightly empty feeling. It’s that common feeling when watching modern films where you have to ask ‘Just because computer effects are so advanced now you can show anything on screen, the real question is should you?’. If, after a while, you lack a real connection to the material, all of the flashes and spurts of excitement are in danger of becoming damp squibs.

With that said and understanding that this is the modern blockbuster and should be appreciated as such, ‘The Pirates: The Last Royal Treasure’ has much to enjoy. The cast is full of popular Korean stars and there is a good blend of characters; Korean films always like mixing together a band of eccentric characters, and ‘The Pirates’ is no different. The interplay between said players helps drag the story through the less involving moments, especially when proceedings become too CGI-heavy. The big action sequences, when they do show a touch of restraint, are exciting and effective too, only coming apart when the effects department take over and start throwing everything at the screen (the admittedly adorable CGI penguin comes to mind).

‘The Pirates: The Last Royal Treasure’ is often fun, occasionally frustrating, but always slickly put together. The result is two hours of overblown entertainment that just about holds the attention.