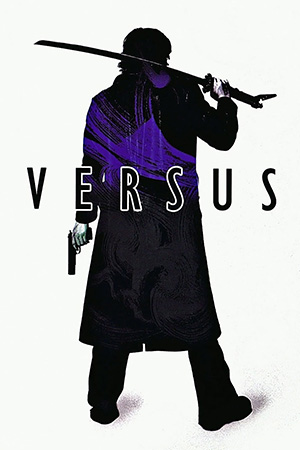 On Earth there are 666 portals between this world and the next.  The 444th exists in Japan and lies deep within the “forest of resurrection”, so-called because it allows a dead person’s soul to be dragged back into his body to restore life (well, physically at least).  When two escaped convicts use this mythical place as refuge from the police and local gangsters, all havoc breaks lose as the bodies start rising from the ground for a second helping of bullets.

Emerging almost seemingly out of nowhere, ‘Versus’ is a new Japanese action flick that blends together a mix of gore, guns and kung fu. While this combination may not be entirely original, it has to be said that ‘Versus’ delivers a really well put together package. Structured as more of a dark comedy than a straightforward action flick, the film dishes up a bit of fantasy back story before diving head first into some typically zany and over-the-top gorey fun. Admittedly everything is fairly low budget, but the combination of laughably gruesome effects and some solid performances, particularly from Tak Sakaguchi, make the film far more enjoyable than you would expect.

What really makes ‘Versus’ stand out though is undoubtedly its many inventive action sequences.  Clearly influenced by the Hong Kong highlights of yesteryear, the film contains numerous stylish gunplay sequences as well as a handful of acrobatic and intricately choreographed fights scenes. Sure, the editing is occasionally a little bit choppy and it’s not perfect, but the presentation is exceptional and fight fans are likely to be extremely satisfied.

‘Versus’ delivers an extremely enjoyable action outing in a very stylish package.  Please take note current Hollywood and Hong Kong filmmakers, this is the kind of action movie that you should be making!