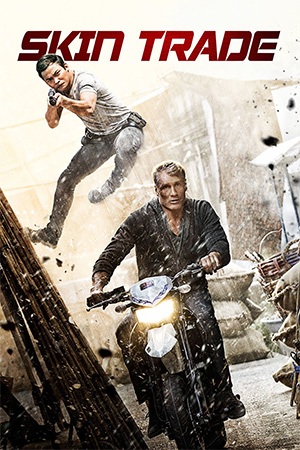 Tough US cop Nick Cassidy (Lundgren) is determined to bring down renowned Russian crime boss Viktor (Pearlman) no matter the cost. That cost ends up being his family who are wiped out by Viktor in retaliation for the killing of his youngest son. Cassidy swears vengeance and hot foots it to Bangkok where Viktor is hiding out. Here, after some obligatory confusion and a one-on-one fight, Cassidy teams with a local cop (Jaa) who is on a mission to shut down a sex trafficking ring operated by Viktor and his cronies. With the two cops having an enemy in common they go after the seemingly untouchable kingpin with much in the way of carnage, chaos and martial arts clashes ensuing.

A worthy attempt to fuse a serious topic with insane action, ‘Skin Trade’ can’t quite find the right balance between the two but rollicks along on the charisma and fight power of its stars. Human trafficking is an unpleasant subject and using it to frame a full on action film may seem a bit off putting (though it did work for ‘Taken’) but the filmmakers don’t shy away from the unpleasantness of the issue. While the film is by no means a serious examination of the dark topic, ‘Skin Trade’ still features several uncomfortable scenes that deal with the heinous crime. Unfortunately they don’t always sit so well with the bombastic action meaning the film comes off a little seedier than perhaps intended. The mish-mash of storylines don’t always come together smoothly either (hindered by some sloppy editing), there being a bit too much going on that makes proceedings unnecessarily convoluted.

Thankfully, with a cast that features action legends such as Lundgren, Jaa and Jai White, ‘Skin Trade’ is packed with insane action. Often violent in nature (lots of bloody squibs!) and featuring a surfeit of chases, shoot-outs and explosions the filmmakers utilise their decent budget to sate action fans with a heady number of set-pieces. However, the standouts (and what ultimately lift the film above its flaws) are the two extended Jaa fight scenes: one with Lundgren and another with Jai White. Sustained, viciously choreographed and putting the fight stars through their paces these two epic fights are well executed and full of brutal impact.

Kudos to co-writer/producer Lundgren and his team for attempting to shed light on a dark matter within the framework of an action movie but while the action soars the drama stalls meaning ‘Skin Trade’ doesn’t quite succeed in its well meaning intentions.