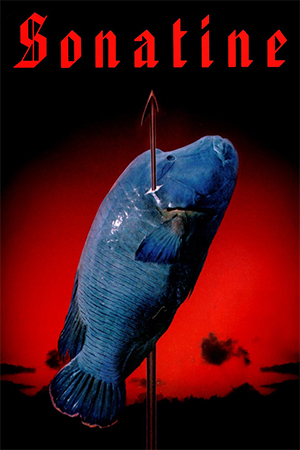 When a gang war breaks out on the island of Okinawa, the Yakuza decide to send in one of their most experienced members to assist in negotiations.  Murakawa (Kitano) is selected and shipped out with a handful of men to resolve the conflict.  Upon their arrival, Murakawa and friends find themselves caught in the crossfire so they retreat to a secret seaside residence.  In this calming environment the veteran gangsters are forced to relax and, amazingly enough, even have some fun.  However, all good things must come to an end and when their enemies catch up with them, Murakawa and the gang are forced to go back into action.

Takeshi Kitano has often been praised for his expertise in creating unique gangster flicks and 1993’s ‘Sonatine’ is certainly no exception. Although it takes place in a violent world, the film is not your typical action movie filled with blood-soaked, shoot-outs. Instead, ‘Sonatine’ is a much more sedate piece of work that really revolves around the inner conflicts of its main characters. This is done by telling the familiar tale of a group of strangers thrown together and forced to bond. While this may not sound like much, Kitano is a true master of his art and he manages to allow the audience to grow and learn with the characters as the film progresses. There’s also some really touching moments as the gangsters begin to see the errors of their ways, as well as some brilliantly subtle moments of humour that really help to show the humanity in everyone.

I’ve always found Kitano’s subtle directorial style to be mesmerising and ‘Sonatine’ continues that trend.  He’s never afraid to show a scene in complete silence so as to convey the mood and he will often linger on shots that other directors may consider trivial. You also always feel that Kitano understands the subject matter that he is dealing with and he will make his characters suffer for any wrong doings, whether it be emotionally or physically.  This of course means that the outcome of the piece can sometimes be less than pleasurable but Kitano tries to make his characters think as real people and ultimately this means that they must pay the price for their actions.

Although it may not be for everyone, ‘Sonatine’ is a captivating watch that really shows a different side to the gangster lifestyle. It’s also nice to see a film in this genre that isn’t just about action and manages to offer up some fascinating characters that are a joy to wrap your brains around.