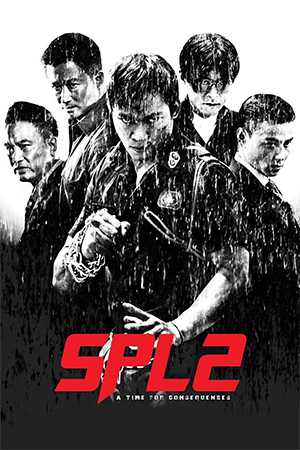 More of a thematic sequel rather than a straight follow up to the groundbreaking and Donnie Yen superstar making, ‘Sha Po Lang’ (re-titled ‘Kill Zone’ for western audiences!), ‘SPL 2’/‘Kill Zone 2’ is nevertheless another barnstorming slice of crime kung fu. Donnie Yen is out this time around but returning cast members Wu Jing and Simon Yam are front and centre (albeit playing different characters) and are joined by Thai superstar Tony Jaa.

Jing is Kit, an undercover narcotics cop (with a potential career ruining drug habit to boot) whose cover is blown during a high stakes operation involving evil drug lord Hung Mong- Gong (Koo). A result of his cover being blown, Hung’s gang send Kit to a maximum security prison in Thailand as punishment to let him rot. Kit’s superior and Uncle, Chan Kwok-Wah (Yam), realises the danger his nephew is in and mounts a desperate operation to save him. Meanwhile, Thai prison guard Chatchai (Jaa) is struggling with his own morals under the leadership of a demented warden (Zhang). In desperate need of money to save his on-death’s-bed-daughter he turns a blind eye to Zhang’s nefarious goings on for money but when he crosses paths with Kit (who may just the one to save his daughter!) is soon thrown into a dangerous world of drug cartels, organ traffickers and frantic cops as he struggles to do what is right.

Attempting to sum up the labyrinth plot of ‘SPL 2’ succinctly is no small task and the above paragraph is probably just as confusing as the film’s opening act. However, sticking with ‘SPL 2’ makes for an overall rewarding experience as director Soi Cheang (‘Dog Bite Dog’, ‘Shamo’) takes the viewer on a wild, thrilling and at times incredibly dark ride. Albeit with a heavy dose of melodrama! Much like its predecessor, it’s a crime story at heart injected with regular bouts of brutal martial arts action. Those expecting an all out kick-fest based on the cast may be disappointed that there is a lot of story and character interaction to chew on as the slithering plot weaves it’s intricate tale. That said, Soi Cheang wisely builds to his action and for the most part it erupts out of what is happening in the story, rather than just shoehorning in another scrap. That said, the action while superb does become quite insane and OTT come the finale, it being a little at odds with the more dramatic and gritty portions of the film, much like the first ‘SPL’. But again, that said, Soi Cheang and action choreographer Li Chung-Chi (‘Invisible Target’, ‘Legendary Assassin’) craft some fantastic action including a shootout gone wrong in a ferry port terminal, a bravura prison riot, and a frantic rescue mission where Jaa literally uses a bus as a weapon!

Unfortunately, the dreaded melodrama (complete with wolf metaphors!) does rear its ugly head on occasion, dragging proceedings on unnecessarily. Having said that, it’s not as cloying as some may have you believe and arguably the drama is what makes the film sing. Soi Cheang wrings some taut tension out of proceedings and the cast are all superb. It’s great to see Jaa in a leading role again and one that actually sees him act as well as kick some major ass. Louis Koo delivers another despicable villain with aplomb and while Zhang Jin’s evil warden is a little too much like a super villain henchman from a comic book movie he does make for a formidable foe. Yet, the film is stolen by Yam and Jing. Yam, who let’s face it is never bad, is great as the police officer who puts all procedural protocol aside to rescue his nephew: sturdy, resourceful, increasingly desperate but determined to rescue a loved one. Likewise, Jing is on great form here and like Jaa gets to stretch the acting muscles as well as the high kicking ones. His drug habit and desperation at being stuck in an inescapable situation (not least when he’s thrown in a ruthless prison where no one speaks his language!) make for a character that is always on the edge but must find strength to fight if he is to survive. Jing seems to be relishing the part and shares good chemistry with Jaa.

While it’s a little on the convoluted side, suffers from a somewhat jarring and unsatisfying ending scene and emoji texting all but saves the day in one instance (!), ‘SPL 2’ is still a stellar crime action drama. Despite its flaws, when it fires on all cylinders this is some great action packed, tension fuelled entertainment with a cast on top form.