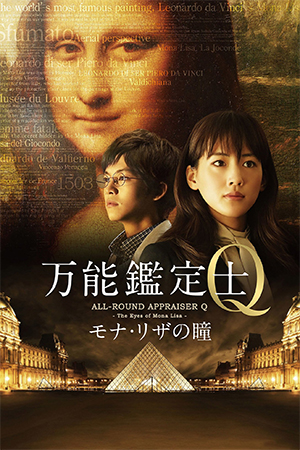 Diffident magazine writer Yuto is under pressure from his editor to produce a story worth printing. While covering a gourmet event he happens upon Riko Rinda, an private appraiser who is working with a client that believes the event is not all it seems. Riko has an exceptional mind and pieces together enough information to work out that the event she is attending is the cover for a robbery; her deductions prove correct, the most important items of the crime are recovered and Yuto looks in awe at this remarkable woman.

Determined to write a story on Riko – who runs a company called ‘All-Round Appraiser Q’ that will appraise absolutely anything for a fee – Yuto follows her around, even going as far as to travel to Paris to tail her on her latest case. This assignment, however, is very different to her others as she is asked to appraise the world famous Mona Lisa before it is sent to Tokyo for an exhibition. Riko’s most testing case is made all the more intense by the suspicions of an art expert from Japan and rumours of a conspiracy involving fraud and the bizarre hidden code that might be in the eyes of the Mona Lisa.

It might not have a title that rolls off the tongue, but ‘All-Round Appraiser Q: The Eyes Of The Mona Lisa’ is a sprightly caper that is one of the more unusual detective stories of recent years. Although our heroine is not a detective per se, her methods and remarkable observational skills are a clear nod to Sherlock Holmes and other razor sharp intellects that have tackled crime. Of course the skill of this film is that there isn’t even a discernible crime taking place for much of the running time yet it is still an interesting watch.

Disbelief doesn’t so much have to be suspend here as fired directly into the stratosphere. Riko’s discernment during the gourmet evening go from the ingenious to the freakishly supernatural; it proves a little too reliant on just how forgiving a willing viewer can be. Thankfully the main storyline drags events and characters back to a slightly more realistic situation; it’s no fun having a heroine who is completely invulnerable and considerably ahead of everyone else. Riko Rinda is a believable protagonist thanks to another fine performance from the divine Haruka Ayase and writing which makes her much less aloof and distant than Holmes et al.

‘All-Round Appraiser Q’ is a winning crime film with a brilliant heroine and a very pleasant dynamic between her and the adoring acolyte Yuto. There isn’t forced romance (though this will probably be explored in potential sequels) and the audience has two leads they can resolutely cheer on. A follow-up would be most welcome.