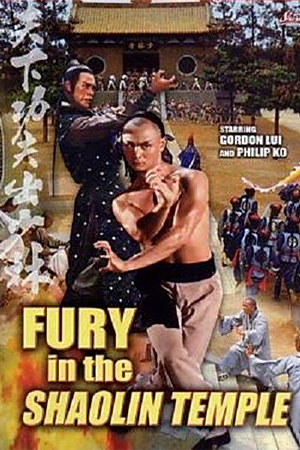 If Liu Chia-Liang is the Akira Kurosawa of Hong Kong cinema, Godfrey Ho is the Roger Corman. Like Corman, nobody would doubt that Ho has made a contribution to the genre, but he could certainly not be seen as a good director. His field is exploitation and within these very well-defined boundaries he succeeds in creating the occasional film of interest, usually by directly exploiting what is popular at the time. Here he gives Liu Chia-Hui his umpteenth role as a monk and seeks to emulate the beloved theme of the Shaolin temple, something that Liu Chia-Liang had just about perfected with ’36th Chamber of Shaolin’. This, though, is a very different production.

When a young boy finds himself alone in the world when his adoptive father disappears after a fight, his first thought is to go to Shaolin. With the help of a kindly cook, this goal is achieved and soon the boy grows into a confident fighter. Meanwhile an ambitious kung-fu master has his sights on domination and knows he must own the manual of the Shaolin Fist to succeed. Therefore he creates a plot to frame someone with the theft and keep the valuable instruction book for himself. Soon turmoil is aroused in the martial world and the new Shaolin disciple finds himself in the middle of it.

It’s hard to explain the plot of ‘Fury In The Shaolin Temple’ in a few lines, such is the hackneyed nature of the film. Needless to say this is an attempt to throw in everything that could be seen as popular in the genre when the film was made, with Shaolin, kung fu manuals and outrageous villains all making an appearance. This film, quite simply put, makes absolutely no sense. For example, Phillip Ko Fei is misleadingly down as one of the main stars, but appears in just one fight scene – one which has absolutely nothing to do with anything else in the film. Liu Chia-Hui looks as if he’s sleepwalking through the production with only a passing interest in what is happening around him. His apathy is shared by the viewer. The only real entertainment is watching the truly menacing villain over-act and cackle viciously while bearing a passing resemblance to Jimmy Saville (sorry to all non-UK readers). His frequent close-ups and stares add a creepy curiousity value to this. Finally, and vitally, the fight action is mediocre. With films like ‘Prodigal Son’, ‘Knockabout’ and ‘The Young Master’ (not to mention scores of other classics) around near the same time, the choreography here looks hopelessly out-dated and is a certain black mark in the career of the usually dependable Chin Yuet-Sang. It says much for this exploitation flick when the 18 Shaolin warriors wear lycra bodystockings in one scene! Even fans of ‘Fame’ might want to look elsewhere for entertainment.