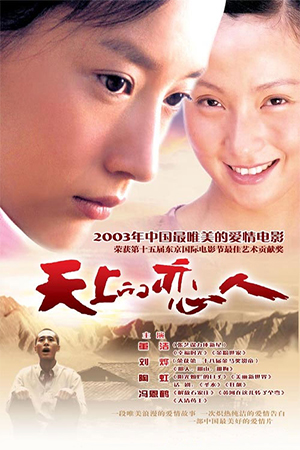 The first thing to be noted about this Chinese production is its unorthodox idea of having a negative review of itself on the back of the DVD. Quite what the marketing hierarchy thought this would achieve is debatable, but, by the time the final credits roll, it dawns on the viewer that there was a hint of truth in the poorly chosen words.

Wang leads a simple life in the mountains of China with his elderly father, an existence that is altered when a young mute woman arrives in the village. Initially she is blamed for a subsequent accident that robbed Wang’s father of his eyesight, but eventually the village folk take the timid newcomer to their hearts. The mute girl reveals that she has come to track down her brother, though she stays much longer and helps out Wang in his current plight. Gradually the two forge a close bond even though they are unable to communicate with one another properly. Nevertheless it seems that the mute girl begins to develop feelings for Wang while his heart is eternally reserved for his unrequited love Zhu Ling. This unusual love triangle draws to its conclusion with each of the three learning a little more about others.

The superior Mainland Chinese productions have sought to weave together a compelling story with images of a world very different from our own. Directors like Zhang Yimou and Chen Kaige revel in China’s majesty while also examining its society and the varied individuals who inhabit it. ‘Sky Lovers’ is unfortunately not able to achieve such a careful balance and ultimately turns into an attractive travelogue of mountainous China rather than a film with a real hook.

Director Jiang Qingmin is unsure of what the real impetus of the film should be; is it a love story or a musing on rural life in China – the film-makers fail to take a positive step in either direction. The mute girl enters the village under the pretext of a search for her brother. However, this whole awkward narrative thread is lazily used with little or no explanation as to who he is or where he went. The girl is instead content to put this urgent search on a back burner for a significant portion of the film, leaving us wondering why the sub-plot was introduced in the first place. The relationship between Wang and Zhu Ling is also frustrating in its lack of structure – Wang, in particular, has very few of the character nuances essential for capturing the viewers’ sympathies. The film’s dramatic ending – intended to be rich in symbolism despite its surreal nature – is also undone by some hokey looking effects.

‘Sky Lovers’ is undoubtedly a breathtaking film. The awe-inspiring photography of the vast mountains of northern China looks particularly magnificent and its such potent imagery sticks in the mind long after the rest of the superficial film has faded from memory. Like an enticing travel documentary, ‘Sky Lovers’ leaves the viewer with a feeling of wonder toward its subject. Unfortunately, it offers about the same depth, even though the performers are talented enough to make the material live longer than it deserves.