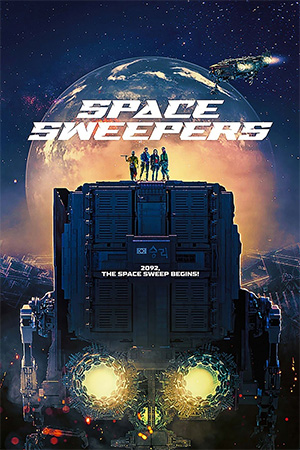 Slick space adventure from Korea, ‘Space Sweepers’ may not be revolutionary in narrative terms but more than makes up for it with likeable characters, oodles of space-set adventure and lashings of superior CGI.

The year is 2092 and space is awash with space sweeper crews who collect the vast quantities of junk adrift, hoping to make a buck or two. Giant cities are now in orbit as Earth is almost inhospitable and potentially dodgy (read: he’s obviously the bad guy!) tech billionaire Sullivan (Armitage) has the answer: he’s terraformed Mars and hopes it will be the new earth. Yet, it comes at a price as he hopes to destroy earth once and for all meaning only the elite will get access to the New Earth/Mars (and his God complex remains intact!). However, the key to terraforming a new planet lies within pint sized Dorothy (Park Ye-Rin) who has escaped the clutches of Sullivan and ended up in the latest trash haul of the crew of The Victory. Bringing the ship’s rag-tag crew together, who are on the verge of bankruptcy and about to go their separate ways, they fight to keep Dorothy safe and expose the evil intentions of Sullivan, all while out running various sweeper crews after their valuable haul.

First and foremost, ‘Space Sweepers’ is fuel injected fun rendered unique by some incredible CGI to create a vastly detailed, lived in space-set world. The effects are second to none and allow the filmmakers to stage some breath-taking space set battles and chases. A mo-capped robot member of The Victory crew also shows how well fully CGI characters have developed and seamlessly integrated into a live action cast. A little like a manga come to life, ‘Space Sweepers’ effects rival Hollywood Blockbusters and help to create a believable and beautiful futuristic world. Some may find it all a little CGI heavy but it’s all (mostly) integrated so well that one soon gets swept up in all the chasing and daring do.

While a rag-tag crew brought together by embarking on a dangerous mission to realise they are really like family is hardly original (and does feel a little stale here!), is thankfully made up for with likeable and energetic characters, a few twists and turns, a surprisingly funning running poop gag (!), and a great bad guy in Armitage. It all reaches a predictable climax but it’s a fun ride getting there, and the film has energy and fun to spare.

A little ‘Fifth Element’, ‘Guardians of the Galaxy’ and Stuart Gordon’s fantastic and underrated ‘Space Truckers’ all mashed into one, ‘Space Sweepers’ finds its own voice once it gets going and while maybe not as fresh as some of the other glowing reviews out there will have you believe, is nevertheless a technical marvel and when it hits it’s full-throttle-space-adventure momentum: a lot of futuristic fun.