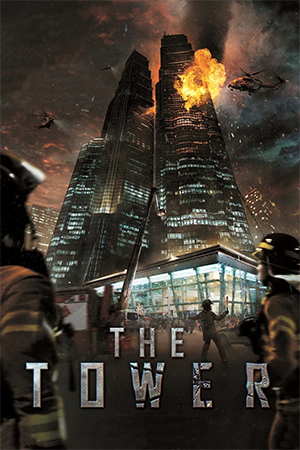 ‘The Tower’ is a brig, brash and bombastic disaster movie and proud of it. Doing it exactly what it says on the tin, Kim Ji-Hoon’s film picks a setting (the Tower Sky building which consists of two 108 story towers connected by a skywalk), fills it with a bunch of characters (from the heroic to the weak to the just plain annoying), then sets off a disaster (in this case a helicopter crashing into one of the towers) and has the survivors trapped inside desperately trying to find a way out (before the tower collapses completely), all the while the fire team (complete with hardened captain who should have stayed home with his wife) attempt to rescue everyone. So far, so ‘Towering Inferno’. Which is essentially what ‘The Tower’ is but set in Seoul and with bigger set-pieces all thrillingly staged with a mixture of impressive practical effects, CGI and stunt-work.

While ‘The Tower’ may not appeal to the lover of say Kim Ki-Duk’s more refined cinema (though it may) but as far as blockbusting entertainment goes, it is pretty darn entertaining.  It hits all the disaster movies tropes (officials not listening when they should, a child in jeopardy, a rescue team trying their best to save everyone) and delivers some spectacular sequences of destruction, mayhem and general disaster insanity. It takes a while to get to all the devastation with a good half hour spent on character introduction, relationship building and far too much comedy mugging. But when that helicopter finally smashes into the side of the building (due to a dodgy updraft near the top of the towers everyone decided to ignore!) the disaster destruction rarely lets up. In fact, ‘The Tower’ becomes quite the thrill ride as floors crumble, explosions rip the building apart, skywalk bridges collapse and in one expertly handled sequence our survivors swing from the side of the building on a window washing platform desperately trying to smash their way back into the tower.

While too many of the characters may be annoying and shouty (though they are mercifully dispatched relatively quickly) and it may not do anything revolutionary new with the genre, ‘The Tower’ is nonetheless a well staged in terms of action and spectacle example of the disaster genre. The film also manages to create a real sense of terror which ratchets up the tension during the scenes of destruction and daring do.  If you are a fan of disaster films then there will be a lot to enjoy here and for pure action disaster entertainment: ‘The Tower’ delivers.