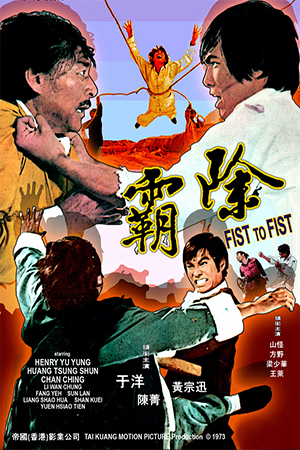 A young police cadet, who has just graduated from the academy, is sent on a mission to apprehend a dangerous criminal. He’s also informed by his commander that the man who killed his father is in the same region as the wanted criminal. So, our hero sets off to a sleepy village to capture his man and avenge his father.

I’m not being lazy with the above synopsis, that really is the whole of the film’s story. The plot is as thin as the postage stamp it was presumably written on. Even by basic kung fu film standards it’s pretty weak and you won’t find any depth in the characters either. Henry Yu Yung plays the ‘man with no charm’ as he spends the movie humourlessly kicking heads in wearing pretty much one facial expression (pissed off). None of the other characters are very interesting or anything beyond the normal stereotypes. There’s the noble old man, the damsel in distress, the rich and ruthless baddie and his group of cackling henchmen.

The two ‘names’ that are likely to draw people to this little known movie are John Woo and Yuen Woo-Ping. If John Woo’s name hadn’t been on the credits, I wouldn’t have any idea that this film was directed by him. This really could have been directed by anybody. The only two links I can see to the rest of John Woo’s work (and these are tenuous) are, the main female character in the film is blind and there are a lot of deaths.

Considering that Yu Yung’s character is a policeman, he doesn’t show much in the way of restraint or moderation (or handcuffs, he must of left them at home, good thing he brought his Boomerang Blade of Death). If he doesn’t kill his opponents, then he just leaves them brutally beaten. This brings me to the second ‘name’ involved behind the camera, Yuen Woo-Ping. There’s no frills to the action created by Woo-Ping and his brother. None of your fancy animal styles or Wu Shu appear here.  The fighting on show is efficient and vicious,  sometimes the choreography consists of the same punch or kick pounding a baddie’s face half a dozen times in succession. This ‘stripped down’ approach to the action stills manages to entertain and at times, excite. The fights also manage to increase in length, danger and enjoyment as the movie progresses.

The plot and characterisation are very weak but there’s enough about the fights to keep a kung fu fan watching till the end.

Notes: John Woo actually served as assistant director for ‘Fist to Fist’, but his name was featured more prominently in later international releases.