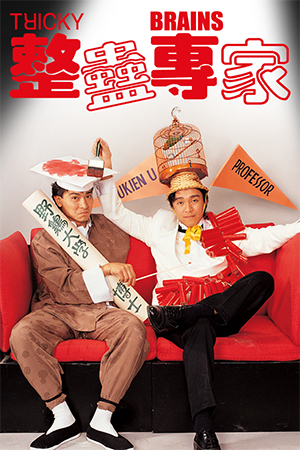 Chi Man-Kit (Lau) is a very serious and studious young man who is a respected member of his business firm and considered by many to be a front runner for promotion.  That is until he begins dating the boss’s daughter who is also sought by the rich and powerful Macky (Waise Lee).  Rather than tarnish his own good name though, Macky decides to disgrace Kit by hiring the world famous King Of Tricks (Chow) to do his dirty work.  Now the question is, with the smart and wily King Of Tricks unleashing his full arsenal against Kit, will Macky get his way or will true love find a way to conquer all by riding this tidal wave of tomfoolery?

This early Stephen Chow/Wong Jing vehicle is something of a slow starter thanks to a surprisingly stilted (and slightly irritating) performance from Andy Lau that dominates the film’s opening.  Thankfully for both the audience and the rather sheepish looking Lau, it isn’t too long before Chow enters into the action bringing with him his unique brand of deadpan humour and a multitude of successful slapstick routines and in-jokes.  Alongside him is the equally amusing Ng Man-Tat who proves that the chemistry between the pair is often the key to a lot of their films, so much so that the laughter here eventually becomes infectious enough to allow even Lau to loosen up for the final third.  Of course this wouldn’t be a Wong Jing film if some of the jokes weren’t bordering on tasteless and there are a couple that stretch the imagination, but thankfully they do little to deviate from the film’s general fun and frivolity.