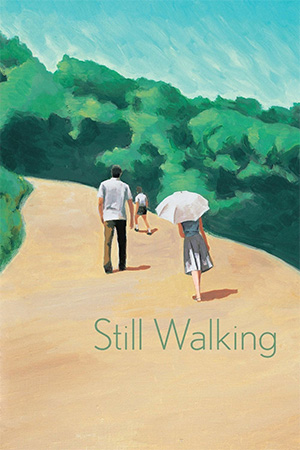 Reluctantly on his way to the family home after years away from his estranged parents is small-time art-restorer Ryota (Abe), accompanied by his new wife and stepson. Meeting him there is his sister and her family as the whole clan come together to commemorate the death of their brother fifteen years earlier. As soon as Ryota arrives the animosity between him and his retired doctor father resurfaces and the latter can barely stand to be in the same room as his son. To the cantankerous head of the family, Ryota is a great disappointment having declined to follow him into the same profession.

As the day progresses, the family begin to confront the tension bubbling under the surface. Ryota and his father discuss the death that shattered them both while his mother and sister try to talk about the awkward situation in their own way. Yet Ryota’s father has canonised his late son and so any mention of his name is bound to stir up difficult emotions.

It is perhaps lazy to say Hirokazu Koreeda is the stylistic heir to the great Ozu – virtually every other review of ‘Still Walking’ uses that comparison as its opening gambit – but this is a film that impels one to repeat that mantra. With his preceding film, ‘Nobody Knows’, Koreeda blended a stark realism with a delicacy that the late Japanese master would have been proud of. Yet ‘Still Walking’ is a genuine homage to him and much more else beyond.

It’s one thing to mimic another auteur, but quite another to make a story live beyond its obvious influences. ‘Still Walking’ is certainly not just Ozu-lite and to pigeon-hole it in such a way is grossly unfair to one of the foremost film-makers in modern Japanese cinema. It starts with such a gentle touch that gradually develops into an intense drama that still retains its understated style, something that is Koreeda as much as it is his inspiration.

‘Still Walking’ is a story about generational differences in a similar way to ‘Tokyo Story’ but relies on a greater dramatic conceit to gain momentum. The death that is barely mentioned still hangs over every moment of the story as the viewer pieces it together and so this is less of a examination of Japanese families per se. Yet to Western eyes the cultural dynamics are impossible to completely ignore and ‘Still Walking’ is as enriching as it is enthralling.

Pedantry aside, the bottom line is that this is a superior dramatic production. Koreeda pays due respect to Ozu with his efforts, but this can be rightfully appreciated as the skill of the man behind the lens. The underlying animosity is very well realised making for fascinating, though uncomfortable viewing. Hiroshi Abe is an obvious acting highlight, yet special mention should be given to Kiki Kirin as the mother whose life has never been allowed to move on from the tragedy. That said, this is best appreciated as a multi-layered ensemble drama where its beauty is in the efforts of everyone involved. ‘Still Walking’ is mature cinema, thoughtful and deceptively powerful, another significant contribution to world cinema by Hirokazu Koreeda.