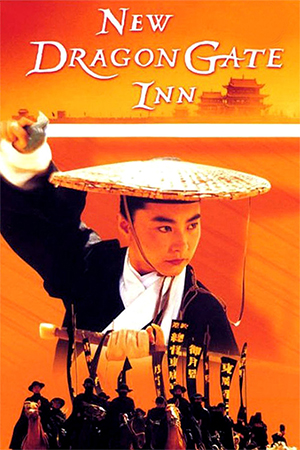 This film is an updated version of the 1966 classic ‘Dragon Gate Inn’. Interestingly, the original action choreography was styled in no small part by a certain Hung Kam Bo (Sammo Hung)! In this remake, Ching Siu-Tung takes on the role of action director; however, I feel that Sammo would have done a better job, due to the choreographed sequences not relating as well to the camera as they would have done under Sammo’s talented eye. Also, the fights seem cramped, filmed in tight shots with the rest of the movie making excellent use of space and surroundings.

The story also goes off track at times, with Leung’s important role as a resistance fighter being under-developed and overshadowed by Maggie Cheung as the peripheral innkeeper character. Action-wise the movie stops and starts, with the fights finishing before they get going (much like the original), and Miss Cheung seems more than uncomfortable brandishing a sword! Donnie Yen is also wasted, not appearing for the entire middle section of the film, before delivering some ordinary moves in the final reel. The best choreography in the movie is not a fight, but a striptease ‘duel’, showing Cheung and Lin develop their own sexual chemistry stealing each other’s clothes and admiring what they see!

The ordinary action is surrounded by more superior dialogue and visuals to hold our attention. Some excellent acting is on show, mixing a tense atmosphere with dark humour, while the cinematography is a joy to behold. Especially the final scene in the Gobi desert, as Hui Min uses the vast, pastel background to good effect with a contrast of sharp colours.

Essentially a case of style over substance, this is inferior to ‘Swordsman 2’ and may disappoint die-hard action fans, but would prove a good introduction to swordplay style films, especially for the H.K uninitiated and Hollywood lovers, due to it’s added emphasis on acting, dialogue and exciting visuals.