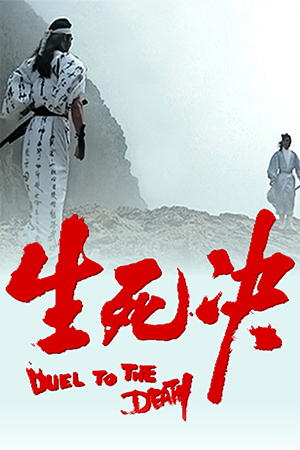 Ching had been part of the Hong Kong filmmaking world from infancy, his father being Shaw Brothers director Ching Gong, and the young Ching would be schooled at the Peking Opera School (and would later assume action direction duties on ‘Peking Opera Blues’).  Having been a bit part actor, in ‘Come Drink With Me’ amongst others, Ching began action direction in 1974 with ‘The Shaolin Boxer’.

After nine years of working on other filmmakers’ projects Ching clearly wanted to helm his own film, and ‘Duel To The Death can justifiably be called “a Ching Siu Tung film”; he co-wrote, directed and choreographed the action.  And delivered one of the most inventive and assured wuxia pien movies of the eighties, whose relative obscurity in the West may be down to its release in the same year as ‘Zu: Warriors From The Magic Mountain’.

The story is the stuff of a thousand kung fu movies; with each new decade Japan and China pit their finest swordsmen in a duel to see whose martial art is finer.  Bo Ching Wan (Damian Lau) of the Shaolin Temple opts to represent China against the Japanese blade Hashimoto (Chui Siu Keung).  While Bo and Hashimoto desire a fair fight, background political machinations threaten the purity of the contest.  Hashimoto’s aide, Kenji (Eddy Ko) is under orders to slay Bo and kidnap the martial arts masters attending the duel for further study in Japan.  And whom amongst the Chinese, including the owner of the duel’s venue (Paul Chang Chung) and his daughter Sheng Nan (Flora Cheung, who movie career was all too brief), can Bo trust?  And who are those deadly Ninja warriors, who literally appear from nowhere and vanish in puffs of smoke, in the service of?

A work of supreme pulp art, ‘Duel To The Death’ hits the ground running with a ninja attack on the Shaolin Temple and rarely slackens the pace.  Seemingly shot day-for-night, this opening assault is a dazzling blend of choreography and camerawork from a director hungry to demonstrate his talent.  Employing two cinematographers, Ching’s undercranked cameras weave amongst battling warriors who drop into and fly out of frame with nonchalant grace.  Ching populates his backgrounds with life and bustle (making him a natural creative partner with the similarly minded Tsui Hark), and this opening clash is notable for the wirework spectacle occurring behind the primary action.

Ching does not empty his arsenal with this initial volley; deliriously ingenious set pieces punctuate and propel the intrigue.  Actual kung fu is mostly absent bar an early skirmish between Kenji and Bo’s teacher, but the Shaw influence is there in the artful, traditional swordplay, with a crossing of swords between Bo, a bewildered Sheng Nan and her father a high point of full-blooded balletic swordplay.  In another nod to Shaw, thick blood runs in the frequent skirmishes, with legs, fingers and heads being lopped off, and a ninja cleft in twain to reveal another ninja jumping through his bisected brother, who then explodes when impaled!

Outrageous visuals are what make ‘Duel To The Death so memorable.  While more grounded in reality than ‘Zu’ Ching repeatedly flirts with the supernatural, particularly when employing the ninja.  Relegated to the dustbin of camp eighties trash (though briefly resurrected in ‘The Last Samurai’), Ching’s film is a hymn to the ninja myth, the “silent people” whose combat abilities are honed to an otherworldly degree.  Ninja vanish and reappear, tunnel through the ground (as Jacky Cheung would later do in ‘A Chinese Ghost Story Part II’) and most incredibly one giant ninja bursts into six regular warriors, one of whom is female and flashes Bo’s teacher, who must close his eyes to the disrobed woman and thus is captured!

Fights in the desert and forests recall King Hu’s ‘A Touch Of Zen’, but, intentional or not, ‘Duel To The Death’s wilder imaginings resemble Alejandro Jodorowsky’s phantasmagorical ‘El Topo’ and ‘The Holy Mountain’.

While lagging midway through the brief 83 minute running time, the story is efficiently told, with enough musing on the futility of duelling to give Bo and Hashimoto, and their situation, some substance.  A nice aside during a festival has the duel mocked by a Punch & Judy style puppeteer and there is the Zen suggestion that slavish devotion to the fighting style and glory of a school is an easy road to madness.  The climactic duel, while heavy on swordplay and wirework, is subdued in realization that any victory will be hollow after the preceding violence.

Typically for many Hong Kong productions the Japanese are portrayed as obtuse, kamikaze, imperialist bullyboys, accompanied by a strident militaristic score.  Presumably for commercial reasons, all the Japanese characters speak in Cantonese save for a lone “Hai” from Hashimoto.

But deficiencies are nullified by the stylish confidence of ‘Duel To The Death’.  Ching’s eye for composition is striking and the production designers had free reign with the costuming and sets.  And in a nice touch, when unsheathed the heroes’ swords sing a high-pitched wail that echoes the sonic booms given out by six shooters in Sergio Leone’s spaghetti Westerns.  Check out this neglected gem now.