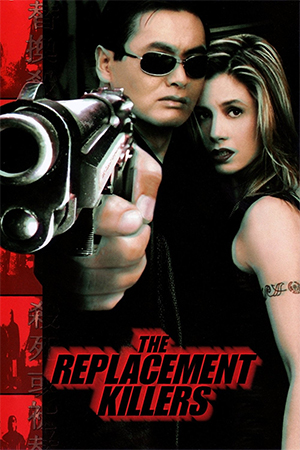 After numerous offers that included a co-starring role in ‘Alien Resurrection’, Chow Yun-Fat finally decided to make his English-language movie debut in this very American actioner.  Anyone that was familiar with Yun-Fat’s previous films would have prayed that he would opt to once again play a gun-toting assassin, but ‘The Replacement Killers’ proves that this isn’t always a successful mix.

John Lee (Yun-Fat) is an expert assassin working for Mr. Wei, one of the most powerful crime bosses in town.  When he is unable to perform a hit, he puts his life in danger and his only way out is to return to his homeland of China.  Firstly though, he must obtain a passport from someone that is not directly linked to Mr. Wei and his saviour comes in the form of Meg Coburn (Sorvino).  After trashing her apartment in a gun battle and dragging Coburn along for the ride, Lee begins to realise that in this city there really is no way out so he must turn and face the consequences of his actions.  Unbeknownst to Lee however, two new replacement killers have been bought in to finish the job and eliminate him from the equation.

‘The Replacement Killers’ is about as by-the-numbers as an action flick can get. It brings absolutely nothing new or vaguely interesting to the genre, and it’s surprising that Yun-Fat chose this film to make his debut. Antoine Fuqua is a director who clearly favours style over substance, and there’s definitely no sign of any John Woo-esque bonds or morals. Instead, Yun-Fat is forced to fight in amongst a sea of average actions heroes by delivering cheesy dialogue and walking around in slow motion. Of course, there is still no denying that he brings his usual charisma to the role, but this definitely feels like a waste of his talents.

Even though it clearly lacks originality, the action in ‘The Replacement Killers’ is still fairly entertaining.  Fuqua, whose only previous directorial credit was for the ‘Gangsta’s Paradise’ music video, has clearly been inspired by Woo and litters the film with slow motion gun battles. Unfortunately though, he doesn’t really have the experience to make it matter and you often feel like all of the battles are somewhat meaningless. His background in music videos is also evident, and you can guarantee that every shootout will come complete with some kind of funky background beat. While this certainly works in some scenes, particularly the opening, it does eventually become somewhat tiresome.

‘The Replacement Killers’ is a film that borrows heavily from infinitely better works and winds up being distinctly average. While the trendy action still makes it watchable, it’s not enough to push it past the 3 star mark.