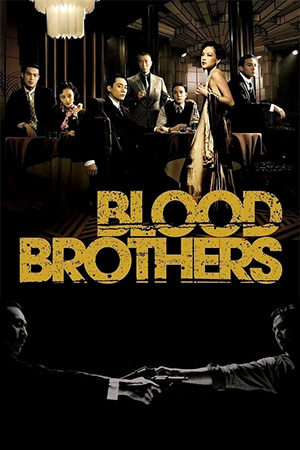 It’s gangster time again in Alexi Tan’s reworking/homage/inspired by version of the great John Woo film, ‘Bullet in the Head’. To be honest, ‘Blood Brothers’ only bares a passing resemblance to that awesome film in that it deals with three friends who have their world and friendship torn apart as they rise to criminal power in 1930s Shanghai. Much has also been made that this is produced by Woo himself and a lot of the marketing has tried to sell the film as a gun toting extravaganza. It is far from it and despite Woo’s involvement, ‘Blood Brothers’ is a distinctly lacklustre affair and something any moviegoer hasn’t seen a million times before.

1930s Shanghai is certainly beautifully recreated and the cinematography is often stunning but this tale of three friends (two brothers and their mate) who venture to Shanghai to work in the famous Paradise club is just so run-of-the-mill. Their rise to power (and wearing sharp suits) happens all too quickly as does their once loyal friendships falling apart. Throw in a hot femme fatale (the gorgeous Shu Qi) and a nasty gang boss to gun down come the finale (Sun Honglei, who does create an impressively dominate presence) and, well, it’s your typical rise and fall through the gangster underworld. People die, trust is lost and everything leads to the requisite final gun battle. Said battle is well done and adequately explosive but Blood Brothers is no gunplay spectacular.

This wouldn’t be so bad if there was some depth to proceedings but it’s all a bit wishy-washy, especially the rather intrusive music playing over all the dramatic scenes. There is style to burn and the cast aren’t bad with Liu Ye particularly memorable as the somewhat sociopathic member of the trio. As mentioned, the film is certainly crafted well in the production department and, to be honest, proceedings do get better after the first twenty minutes or so (when the makers finally ease up on all the twinkly music, dissolves and melodramatics).

Not a complete waste of time as it does provide some basic gangster movie stylings but ‘Blood Brothers’ is just that: an exercise in style and a style that has been done much better by other films.