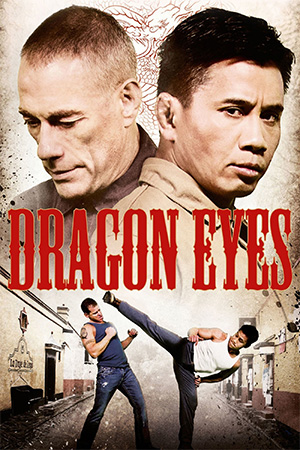 ‘Dragon Eyes’ is loosely based on Akira Kurosawa’s ‘Yojimbo’, a universally translatable story that has been successfully reworked for movies such as ‘A Fistful Of Dollars’ and ‘Last Man Standing’. But, with a low budget and a relatively unknown lead, is this a story that really needed to be re-told?

In the neighbourhood of St. Jude Square, the duelling gangs of local kingpins Dash and Antuan terrorise the streets and the citizens live in constant fear and despair. That is until mysterious stranger Ryan Hong (Cung Le) arrives in town. He begins to play one gang against the other using his martial arts skills, and by calling on the teachings of his mentor Tiano (Jean-Claude Van Damme) to find the strength to battle back. However, just as he begins to bring the community under control, Hong is confronted by Mr. V, the town’s ruthless and corrupt police chief. At first Mr. V is impressed by Hong’s skill, but soon sees Hong as a threat to his regime, and the two warriors become locked in a head-to-head battle…

Best described as a ghetto style martial arts movie, ‘Dragon Eyes’ is a bare-bones retelling of a classic tale that seems far more concerned with hip hop beats than any kind of cohesive narrative. Opting to tell its tale by flip flopping between time periods, the film lacks any kind of clear direction and quickly becomes overly confusing and messy. Several subplots seem to slip by unnoticed, while the rather abrupt ending feels strangely devoid of competent resolution. Cung Le in the lead also signifies a major problem, simply because he has next to no lines and lacks both the screen presence and charisma to pull this off. Similarly, the supporting cast are utterly wasted, with talents like Van Damme and Peter Weller given minimal screen time and nothing but a handful of hammy dialogue.

As for the action, this too leaves a lot to be desired. Cung Le himself was responsible for the choreography, but sadly his fight sequences fair about as well as his acting. You can clearly see he has been heavily influenced by his MMA background, as there are a lot of grapples and brutal punches used to finish off opponents. Unfortunately though, real fighting rarely translates well to the screen, and although it isn’t awful it just seems to lack any kind of fluidity. Van Damme fairs slightly better but considering all he has to do is throw a couple of kicks in a training sequence or two, it doesn’t exactly stretch his skills. In fairness to everyone involved though, it is hard for anyone to look good when every single move is shown in slow motion from a dodgy camera angle!

‘Dragon Eyes’ suffers from one of the worst afflictions that can befall an action movie – being boring. The film wastes the majority of talent involved and meanders along without anything even remotely memorable to offer. Avoid, unless maybe you’re extremely bored and it’s showing on cable.