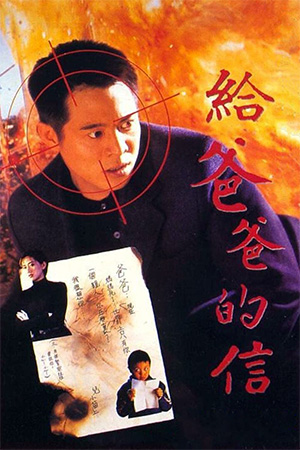 Having conquered the new-wave martial arts film with efforts such as ‘Once Upon A Time In China 1,2+3’ and ‘Fong Sai Yuk 1+2’, Jet Li began to make inroads into the modern day action film. Some fans and critics were uneasy with the idea of this, but gradually Li became box-office king in yet another outlet of the action genre. ‘My Father Is A Hero’ is one of the films that established his current reputation and further enhanced his working relationship with action-director maestro Yuen Kwai.

In one of his most challenging roles, Li plays a Mainland cop who is assigned the dangerous task of infiltrating a criminal organisation. After helping one of the criminals escape from a tough Mainland prison, Lee is accepted by those he hopes to bring down and he must now take the undercover role of a cohort to the organisation’s boss (Yu Wing Gong). When a fiery deal with rival criminals ends in a gun battle and the police become involved in the fracas, Li takes a female detective (Mui) hostage in an attempt to help the rest of his team to escape. The detective is intrigued by Li’s softer side and his refusal to hurt her, so she begins to investigate his real identity. Travelling out to the Mainland, the detective discovers Li’s real identity and meets his wife and son in a distant village. Due to a severe illness though, Li’s wife dies, but asks the detective to take their son with her and find the undercover hero. However, with Li struggling to conceal his real identity and find the next major target in his gang’s series of robberies, Li must juggle his feelings for his son with his dangerous assignment.

Into a very run-of-the-mill story, director Yuen Kwai adds a few levels of depth to the proceedings. Foremost among these is the unique relationship between Jet Li and Yee Sing as the father and son protagonists of the film. Their bond gives the lead character more depth than is reasonably expected of an action film and also creates a number of tension-filled scenes for the audience. Li’s performance in this interesting role is very well handled and allows the action legend to flex his emotional skills alongside his considerable physical presence. Fans hoping to enjoy an action-packed film will not be disappointed though as ‘My Father Is A Hero’ provides some adrenalin pumping set-pieces, notably a classic scene where Li takes on a dozen of the villain’s lackies with a pair of tonfa. Unfortunately there is a lack of restraint at the film’s finale with the wirework becoming over-used and even ridiculous at times. Within the modern day action film, where audiences are asked to believe what they see and accept many of the film’s elements, the fantastical wirework is horribly jarring and laughable, something that doesn’t usually trouble the mythologised new-wave martial arts films like ‘Fong Sai Yuk’. The film is still an above-average Jet Li vehicle with enough positive elements to make it recommended viewing. Certainly worth watching, aside from its faults.