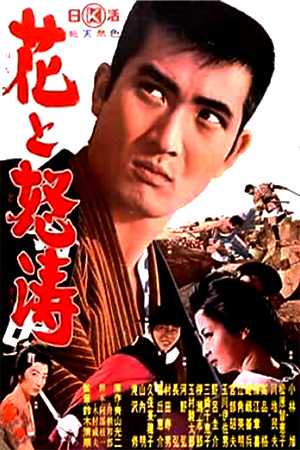 If Akira Kurosawa influenced the makers of Westerns in both the US and Italy, then surely the underrated Seijun Suzuki deserves some mention for his flagrant disregard for gangster movie conventions in the 60s. His knack for off-kilter action shots, black humour, occasional perversity and outlandish plot and characters have surely influenced Takashi Miike and Johnnie To in some shape or form.

Away from Suzuki’s more well known stomping grounds of post war Japan, ‘The Flower and the Angry Waves’ is set in Japan’s pre war past where a former yakuza, Kikuji, now a coal miner leads a revolt against a rival faction over a building contract whilst his past sneaks up from behind. The film ties up big business corruption, trade unionism, black mail, stalking assassins, revolvers and swords into one big action melodrama.

Add into this a subplot over Kikuji’s wife who is lying low from a love hungry detective and you have a great little busy yarn from one of Japan’s great film makers. ‘The Flower and the Angry Waves’ is perhaps too busy to follow, sometimes too wrapped up in old school samurai/yakuza values versus modern greed but Suzuki has never been one to let his pictures rest.

For a b-movie of its era this film looks great, Suzuki manages well to create a visual treat, none of the locations or shots look out of place, even if the visuals are not as progressive or as manic as later movies like ‘Tokyo Drifter’. You need to build a house on foundations after all. Just look at the Hong Kong films of this period to see how outclassed they were when it came to utilising cameras.

The cast carry themselves well, with only Chieko Matsubara for my money perhaps in over her head as Kikuji’s wife. ‘The Flower And The Angry Waves’ is a great little film, as worthy of attention as any of Suzuki’s later films or indeed of any fellow period films. It works as both action picture and as an arresting, visual treat. If only Japan could still produce films of this ilk in bulk instead of exploitation trash then Korea would have something to worry about.

Still creating today, Seijun Suzuki is a master of his game and just look at this as proof.