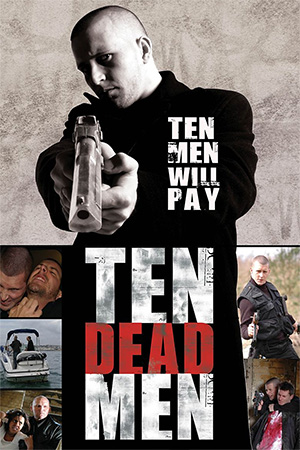 Independent British action cinema takes another step in the right direction with the arrival of ‘Ten Dead Men’, Modern Life’s superior follow up to their cult hit ‘Left for Dead’. Fusing action, drama and violence into a blistering whole, ‘Ten Dead Men’ shows us Brits can hold our own in the action arena. April 19th 2008 at the Odeon cinema in Brighton saw the world premiere of the film with a huge turnout and infectious buzz that made the first public viewing an event to remember. Ross Boyask and Phil Hobden, with help from writer Chris Regan, step up their game to deliver a full on action hit.

Ryan (Brendan Carr) gave up his life of a fulltime killer just a little too late. Striving for the normal life we all have he comes within touching distance of a happy marriage with his beautiful wife, Amy (Pooja Shah), only to see it all crumble when his previous life comes crawling back. Asked to do a ‘favour’ for a former business associate, Ryan thinks he can get in, get the job done and get out, without disrupting his new life. But things soon spiral out of control and when his former boss, Hart (Terry Stone) gets wind of what Ryan is up to he sets his dogs out to even the score. Ryan watches as his wife is slain in front of him and then he himself is left for dead. But, in true revenge movie fashion, Ryan survives his injuries and sets out to kill the ten men that took his perfect life away.

Produced on a considerably small budget, ‘Ten Dead Men’ overcomes any limitations by sticking to its guns and delivering a painful, punchy ride. The talent involved is also a plus and everyone has contributed well to make the best film they can. What keeps ‘Ten Dead Men’ together and keeps you watching in between the bouts of ballsy action, is the story. A simple revenge film it may be but the little twists on the genre help to make it a much more entertaining ride. Ryan is a silent character, hell-bent on one objective. But instead of being the standard emotionless killer, his thoughts, feelings and impulses are described by a narrator who acts as Ryan’s voice. Superbly played by Doug ‘Hellraiser’ Bradley, the narration is a novel idea that may seem unnecessary at first but soon becomes a vital part to the film and gives our hero a lot more depth. Chris Regan’s script also keeps proceedings tight, never bogging the story down in too much exposition or back story but fleshing out the characters enough so we care about them. Kudos to him for also giving each of the ‘Ten Men’ individual personalities and motives so the film never dips into a monotonous slew of faceless bad guys being killed.

Director, Ross Boyask also sharpens his skills as a director, keeping the film lean and mean and managing the fine balance between action, drama and flashback scenes. The cast is great fun as well, with leading man Brendan Carr cutting a mean figure as Ryan. It also helps that he looks like he could stop a Sherman tank in its tracks. As mentioned the ‘Ten Men’ are all individuals and get a chance to shine especially Keith Eyles as the twisted ‘Project Manger’ and JC Mac and Jason Lee Hyde as deadly numskulls, Parker and Garrett. Their little touch of comedy gives the viewer a small reprieve from the violent tone but is never over done nor over shadows the seriousness of the flick. There is also good performances from Pooja Shah, John Rackham, Ben Shockley and even Lee Latchford-Evans (yep, him from Steps). Also look out for appearances from action stalwarts Silvio Simac, Chris Jones and Glen Salvage.

While the story and tone are suitably dark the action is never slack. Not as relentless and as full on as in ‘Left for Dead’ but appropriately brisk, brutal and evenly spaced out. It helps that Jude Poyer (The Medallion, Red Trousers) was on board to choreograph the action and brings his considerable Hong Kong experience to the production. Working with what must have been a pittance for a budget, the action is clean, crisp and fitting to the tough nature of the flick. Highlights include a bruising fight between Ryan and a character appropriately named Bruiser (Tom Gerald), a big shootout come the finale and a smartly choreographed fight between Carr and Silvio Simac. ‘Ten Dead Men’ delivers full on in your face action.

It may be a little rough around the edges and lack the gloss of a big budget action film but ‘Ten Dead Men’ holds it own and shows independent action cinema can serve up the goods, especially when made by people who so obviously love the genre. It’s also great to see a film sticking to its dark roots and not punking out come the final act.