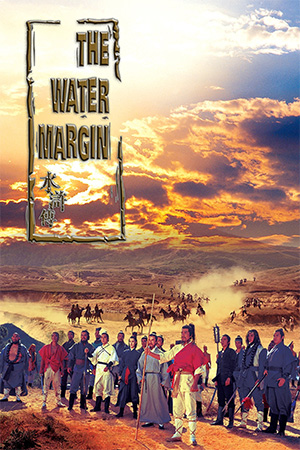 Before watching this milestone production, I had noticed an alarming number of negative reviews mixed in with the positive. Reading some of the criticisms, I found myself almost reluctant to watch Celestial’s remaster of this Shaw Brothers’ epic and the fact that it is an adaptation of Shi Nai-An’s sprawling novel didn’t really fill me with confidence. Therefore, it is with a degree of relief that I can report that ‘The Water Margin’ is an excellent production in all areas.

The 108 rebels of the Liang Shang marshes are a constant thorn in the side of the corrupt government ruling China. The on-going battles between the two forces is seemingly endless, though the government officials manage to secure some very powerful allies in the shape of renowned general Shih Wen and his troops. On noting Shih Wen’s involvement, Sung Chiang – the leader of the outlaws – fears for his ‘brothers’ and realises that there are few man who will be able to combat this new foe. The one man who stands out as worthy of the challenge is Shih’s old kung-fu colleague Lu Chun though he is more interested in perfecting his skills rather than being involved in the fruitless battles of the rebels. Sung Chiang resolves to travel to Lu’s town and persuade him to join the cause, hoping that this righteous master will feel an impulse of duty. However, on his arrival, Sung’s identity is revealed by Lu’s adopted son Yen Ching and his proposal therefore falls upon deaf ears. The situation takes a dramatic turn when Lu’s oily assistant frames him for treason and the uninterested master now finds himself accused of collaborating with the Liang Shang rebels. It is this turn of events that persuades Yen Ching to join the rebels and help them rescue his wrongly imprisoned ‘father’ while also helping his new brethren plot a way of defeating the formidable Shih Wen.

Those who have attempted to read the legendary novel or perhaps enjoyed the popular television series may at first be intrigued as to how this Shaw Brothers production presents the complex characters detailed in Shi Nai-An’s work. Although various minor characters are introduced throughout the film (people who were significant in other parts of the book), the directors’ focus on one particular episode of the story means that only a handful of performers take centre stage. This works as one of the film’s most substantial qualities as each of the lead characters has enough depth within them to create an engrossing narrative. Obviously the themes of brotherhood inherent within Shi Nai-An’s text lend themselves to Chang Cheh’s stellar directorial techniques – the characterisation is skilfully drawn out by Cheh’s little nuances, Wu Ma’s confidence with scenes of drama and Pao Hsieh Li’s narrative focus.

‘The Water Margin’ is a two-hour film that is so confidently constructed that the viewer barely notices the passing of time; much shorter films have dragged in comparison to this minor classic. As was noted, the characters are a key asset to the smooth transition of the running time and the scenes of dialogue have enough sparkle to aid them here. This is by no means an action-packed film though; there are a few impressive battle sequences and a couple of nicely filmed hand-to-hand conflicts, but some may be put off by their infrequency. Though there is relatively little action (considering the 120 minute running time) the film should be judged on its overall merits which, thankfully, there are quite a few of. Nonetheless, viewers wanting an epic that has a multitude of superbly choreographed fight scenes may find ‘The Water Margin’ to be uncomfortable and unrewarding viewing. The soundtrack may also offer some distraction; a peculiar mixture of stolen Spaghetti Western music and what sounds like European prog-rock does raise the odd smile.

With a cast of such famous Shaw Brothers stars and character players, it’s hard to pick just a few actors out of the team. Ti Lung is a supporting player here, but supreme performers like the masterful Ku Feng and Tamba Tetsuro play their parts with the kind of conviction one expects from the very highest quality productions. As ‘The Black Whirlwind’, Fan Mei Sheng is certainly worth mentioning; even in a relatively minor role, Fan is such a refreshing presence within the film that each of his scenes becomes a highlight of the entire production. ‘The Water Margin’ is the kind of grandiose masterwork that is enthralling and, despite the presence of three accomplished directors, has a remarkable consistency to it. Despite its mixed reviews, it is a superb four star film that garners a triumphant recommendation from this reviewer.