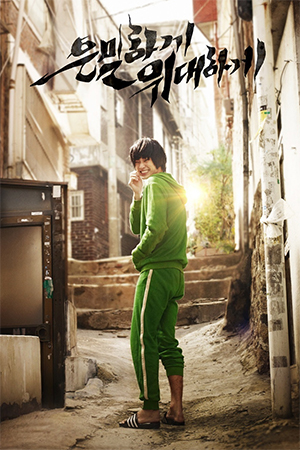 Hun’s massively popular web comic is turned into a massively popular film by ‘Bedevilled’ director Jang Cheol-Soo. Populating it with young stars like Kim Soo-Hyun and Park Ki-Woong, this is a production that clearly had some money thrown its way – perhaps sent in the same trajectory as my remote control as I concluded watching it.

Village simpleton Bang Dong-Ru (Kim Soo-Hyun) is bullied by the local children, patronised by the the adults and goes about his work in his guardian’s convenience store with naïve relish. Yet the grinning youth is actually a highly-trained North Korean agent who has been sent into the South with orders to blend in and await further instructions. It’s soon apparent that a few of the other members of the community are leading double lives and it is only with these the Bang Dong-Ru can break away from his disguise. When fellow agent Lee Hae-Rang – pretending to be a wannabe rock star – arrives in the village, the secret mission that they have prepared for with hot-headed North Korean turned teenage college student Ri Hae-Jin is about to be revealed and friends they have made in the area are put in danger.

An absurd, histrionic, pop-book spy thriller, ‘Secretly, Greatly’ is a tiresome yarn. Two plus hours made to feel like an ice age, this is a disturbingly popular mutant made up of a number of different genres without being in the slightest bit interesting. And dare I mention the mercilessly dragged out climax that has more flaccid false endings than an ‘X Factor’ final.

‘Secretly, Greatly’ starts well before it veers off dramatically. The routine Bang Dong-Ru chronicles to fool the village is amusing and helps engender sympathy for him as a protagonist. There is also the promise of tension with the gradual revealing of his true identity and that age old cinematic trope of a man looking for redemption. Sadly this is a cheap ruse that is soon exposed. Of course suspension of disbelief is need for a film like this, but how are we mean to take a thriller even remotely seriously with such gaping holes in logic. For instance, the North Korean infiltrators zip in and out of the South as if they’re on a day trip to Brighton pier – is this really the divided country with a terrifying DMZ? There comes a point near the end when the village the story is set in features more spies than residents, something which is an unintentionally hilarious sight.

The one thing in the film’s favour is some passable fisticuffs though even this becomes repetitive after the hundredth faceless drone is punched in the head at the end. Of course the fact that the cast is made up of actors styled to look like they’ve just walked in from Myeongdong will appeal to some; perhaps I’m fussy for wanting a tad more. In the end though, ‘Secretly, Greatly’ is neither aspects of its title – it’s a lumbering mess that pours on the pointless pathos when all else fails.