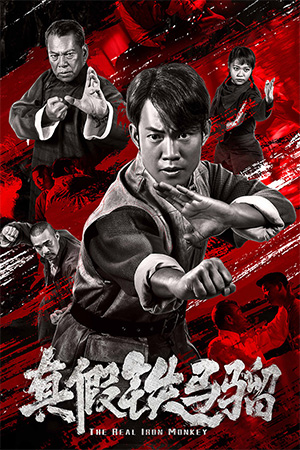 So we had the 1977 classic ‘Iron Monkey’ with Chen Kuan-Tai as star. Then, in 1993, we had the partial remake and genuine masterpiece in its own right ‘Iron Monkey’ with Donnie Yen. Now there is Ken Yip’s low-budget attempt at the folk-lore, this time claiming to be ‘The Real Iron Monkey’. If this is the genuine article, give me the two alleged knock-offs any time. Maybe even subject me to ‘Iron Monkey 2’ again!

Huo Dongge, the chairman of the Jing Wu Athletic Association, is old and needs to find a successor. Only two people qualify; the current deacon of the association, Kong Peng, and the head of another branch named Guo Tian. When the list of candidates has to be transported, Dongge asks the righteous thief known as Iron Monkey to safeguard it. However, he considers himself too old so he recommends that they use his grandson, Zhong Tie. During the trip, Zhong encounters a number of obstacles but when he is attacked by someone with very similar skills to his grandfather, he starts to suspect that something is wrong.

(I ‘borrowed’ this synopsis from our news about the film’s release. It is significantly more interesting than I could have made it. And if the makers of ‘The Real Iron Monkey’ can make something so devoid of effort, why should I waste time typing up the narrative?)

It’s not that ‘The Real Iron Monkey’ is clearly a television production; the genre is packed with low-budget efforts that have pluckily stretched themselves beyond the limits. It’s not that the sets are cheap and the whole thing is given only the merest sheen of respectability by the virtue of modern technology (even a home movie now can look like semi-professional). It’s not even that genre greats like Chen Kuan-Tai and Ku Feng are wasted. The problem with ‘The Real Iron Monkey’ is that it is so insufferably beige that it barely registers in your senses.

There are a few shapes here and there that promise something, anything. A few stances and rolls that hint at monkey kung-fu. Yet the danger of even this becoming mildly diverting is destroyed by poor direction and woeful editing. And this is not something that can just be blamed on budget restrictions – this is on the shoulders of the film-makers who prefer grim, predictable, YouTube-style camerawork and the most pedestrian writing to anything that constitutes effort. The cast is not without charm, the idea not without potential, but ‘The Real Iron Monkey’ is a certified dud.