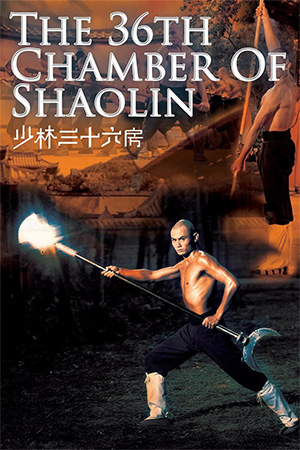 As has been stated frequently by this reviewer, Liu Chia Liang is a director deserving of worldwide praise. Before films like ‘Once Upon A Time In China’ and ‘Crouching Tiger, Hidden Dragon’ showed critics that martial arts films deserve serious examination, the works of Chang Cheh and Liu Chia Liang were impressing arthouse audiences throughout the 70s. Importantly though, neither director rested solely on the reputation of one film; both are responsible for a numerous landmark productions. Liu Chia Liang’s ‘The 36th Chamber Of Shaolin’ is one such important cinematic moment and remains influential not just in Hong Kong film-making, but also globally.

During a time when Manchu forces are oppressing the people of China to an overwhelming degree, a few rebels attempt to stand up to their rulers. With this resistance appearing in small, disorganised pockets though, these moments of insurgence are quickly extinguished. Liu Yu Te (Liu Chia Hui) observes the actions of this vicious regime, but feels he cannot contribute to the patriotic attempts and therefore decides to continue his study unaffected. When his teacher incites the pupils of the school to make a stand against their oppressors, Liu suddenly feels the courage to play his part in the minimal underground movement. It’s not long before the Manchu officials of the town discover this and, with swift action, they kill Liu’s teacher and father. The naive young student is forced to flee town and after a severe beating at the hands of some patrolling fighters, seeks shelter at the Shaolin temple. Liu gradually recovers from his wounds and begins to notice the regimented kung fu training that the monks engage in. After initial reluctance from the Shaolin abbots, he is accepted as a new trainee and starts at the very first chamber of Shaolin. All are amazed at his rapid progress through the 35 chambers and soon after his fighting ability reaches an impressive level. Overcoming one final hurdle before his graduation from the Shaolin training system, Liu – now dubbed San Te by his fellow monks – asks for a 36th chamber to be created to develop fighters in their battles against the Manchus. This revolutionary proposal sees San Te ejected from Shaolin temple and he now travels to his home town to see what has happened since his exit. Now face-to-face with his old enemies, San Te decides to strike a blow for the innocent and organise his own rebels against the villainous masses.

There had been other martial-arts films that had shown Shaolin instruction, but 1978’s ‘The 36th Chamber Of Shaolin’ was the film that took the concept to its very height. After the film’s release, the genre would never quite be the same again. The in-depth showcase of San Te’s development within the confines of the 35 chambers really makes up the body of the film and this in itself was unique for its time. The actual detail of the temple and its workings are obviously open to conjecture as there is little historical evidence to expand on, but Liu Chia Liang imprints his own personality on this aspect of filming. As a very traditional martial artist, Liang makes sure that the whole offering is steeped in reality and probability.

As the monk San Te – a real name from Chinese history – Liu Chia Hui created the seminal image of the Shaolin monk, a vision that remains imprinted on the minds of fans. Once again, ‘The 36th Chamber Of Shaolin’ brought out this now appreciated facet. The film isn’t just a piece of history though; it offers, to this very day, a compelling and action-packed evening’s viewing. With sharp choreography and a plethora of other attributes, Liu Chia Liang’s classic is much more than the average kung-fu fest.