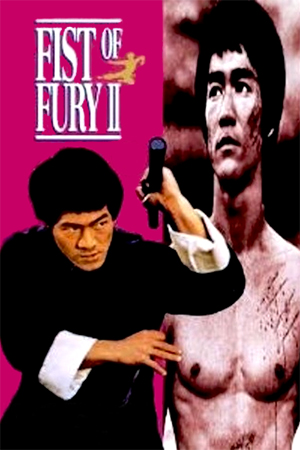 Although Chen Zhen (Bruce Lee) has now passed on, the Chinese Ching-Wu school continues to suffer at the hands of the ruthless Japanese.  Without a strong fighter such as Zhen, they are left utterly exposed and are forced to go into hiding.  To their surprise though, a mysterious stranger appears on the scene and begins to fight back against the Japanese.  This stranger turns out to be Chen Shen (Bruce Li), the brother of Chen Zhen, and he has come to Shanghai seeking revenge for both his brother and the good name of the great Chinese nation.  With so many new and powerful Japanese on the scene though, will Shen be able to fend them off alone or will he end up going the same way as his recently deceased brother?

Following the death of Bruce Lee, numerous movie producers decided to cash in on his popularity by churning out several so-called sequels to his back catalogue.  The majority of these films rarely did justice to the originals but ‘Fist Of Fury II’ is one of the elite few that actually manages to maintain a degree of credibility.  Despite lacking the physical presence of Lee, the film is primarily carried by an entertaining storyline which is essentially a retelling of the original.  Although somewhat simplistic in theory, the concept of the little guy vs. the bullies is an easy theme to warm to and quickly has the audience cheering for the hero.  This aspect is further enhanced by a decent performance from Bruce Li who does an admirable job with the material provided, even if he is still obliged to throw in the mandatory Bruce-isms.  Added to this, the action on show is a notch above the standard chop socky affair as Tommy Lee throws in a number of differing styles and focuses on Li’s obvious strengths in the kicking department.

Although still quite a way off classic standards, ‘Fist Of Fury II’ just goes to show that it is possible to make a “Bruceploitation” flick that is fun to watch.  Through a combination of solid action and an uplifting storyline, this is definitely one of the best films to come out of this bizarre sub-genre and it is likely to find favour with many fans of old school kung fu films.