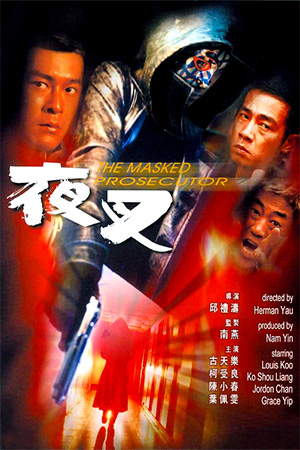 ‘The Masked Prosecutor’ opens with the mock news footage of several Hong Kong criminals walking free from various crimes. Though obviously guilty of some cruel actions, these men find the law can be expertly twisted to their favour and therefore they avoid feeling the full force of justice. This corrupt system brings the mysterious ‘Masked Prosecutor’ out of the shadows and he sets about administering severe beatings to all of those who he feels have evaded proper punishment. With the beatings becoming more and more frequent, the police begin to step up their investigations into who this assailant is and where he has come from. Assigned to the case is an intelligent young detective – who uses his considerable powers of perception to aid him – and an experienced, but weary cop who just longs for a quiet life. The two policemen gradually probe further into their target’s history and, after a series of events brings certain issues to light, the young detective wonders if his own partner might know more than he is willing to say. The background of ‘The Masked Prosecutor’ seems to have some relevance to members of the police force and a particular event that may well have created this semi-mythic character; now the two partners must put aside their loyalties and finally apprehend the vigilante.

An interesting premise is given a reasonable treatment by experienced director Herman Yau and well-played by a very capable cast. Louis Koo as ‘The Masked Prosecutor’ is given the kind of brooding yet sympathetic role that his skills seem so well suited to and Jordan Chan makes the perfect co-star for him. Chan is given a fairly well-written and intriguing character to play, making this slightly eccentric but thorough detective leap off the screen and cry out for a spin-off film. The weakness of the film is that it simply runs out of steam after the hour mark and thus the audience’s attention is not properly focused; instead the pace lags and the potential qualities are undermined. Another minus is the strange hypocrisy in some of the characters’ moralities that becomes more apparent as the film continues. For a quickly produced and competently made feature, ‘The Masked Prosecutor’ offers good value. However, there is no doubt that a little more care may have created a better all round film and a stronger recommendation.