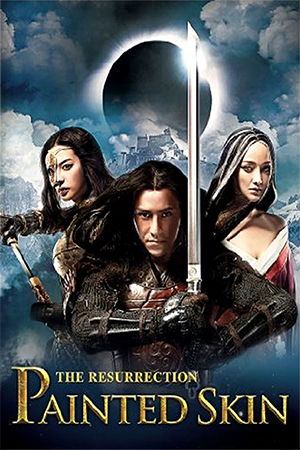 This lavish sequel to the rather enjoyable Donnie Yen original, ‘Painted Skin 2’ ramps up the CGI spectacle and melodramatic romance, all but forgets the action and excitement and thus is a rather hollow but undeniable pretty to look at fantasy. Zhou Xun’s Fox demon, Xiaowei, is now trapped in an icy prison for 500 years. When fellow Bird demon Quer (Yang) takes a liking to Xiaowei and sets her free, the two take up seducing men in order to steal their hearts. Demons need human hearts to survive and when a golden armoured warrior rescues Xiaowei from some bandits, she believes she has found her new suitor and heart to devour. However, said warrior turns out to be Princess Jing (Wei) a wounded soul still in love with her one time protector, Huo (Kun). Still feeling guilty that he could not protect her, Huo feels he can’t be with his one true love but when Jing takes in Xiaowei, the lives of the three intertwine and collide in ways none would have expected.

First off the visual design, use and incorporation of CGI and the fantastical elements of ‘Painted Skin 2’ are often breathtaking. While the original film used CGI more sparingly (to great effect) the sequel ups this aspect to often-incredible proportions to create a fairytale come to life. And if this was director Wuershan’s intention then he has succeeded. While CGI haters may not like this the CGI is used well to create vivid fantasy landscapes and demons come to life. While it certainly saturates the film, the CGI is used effectively and isn’t just thrust into scenes for the sake of it. Actors, sets and locations are all still used but the effective use of CGI (whether you hate it or not) is to be commended. There are a few flaws here and there (the CGI bear attack!) but on the whole the visual aspect of ‘Painted Skin 2’ is astounding: not least the eye-popping scene where Xiaowei sheds her skin to reveal her true form.

However, the makers don’t have the same confident grasp on the narrative and the relationships of the characters. Unfortunately the story of Jing and Huo and their great love just isn’t convincing. Despite the actor’s best efforts they just don’t convince as meant-to-be-lovers and their story and scenes drag on and on. Likewise, Xiaowei’s demon meddling and intrusion on their relationship fails to ignite much passion or excitement and also makes the narrative drag. At well over two hours an inevitable slog sets in and tarnishes proceedings somewhat which is a shame as the visual look of the film is really something to behold and their a couple of subplots that are actually more entertaining than the actual main plot: an apprentice demon slayer (Feng) striking up a cute and funny relationship with Quer and the advancement of the truly evil Tian Ling army on Jing’s empire, who are after the princess for their own nefarious reasons.

In fact, the Tian Lang army subplot provides what little action there is, including a cool scene where Huo takes on a giant guard and a band of wolf men like soldiers, and the truly exciting climax where the leads face-off against the Tian Lang. In fact, the finale is rousing stuff (complete with evil wizard!) and if the film had just included a bit more excitement along these lines then this follow-up may have been as fun as its predecessor.

There is probably more to enjoy here for more avid fans of fantasy romance and as stated the film is visually spectacular but more fire was needed in the icy romance scenes and a bit more excitement and momentum needed to punctuate the drama and visual splendour.