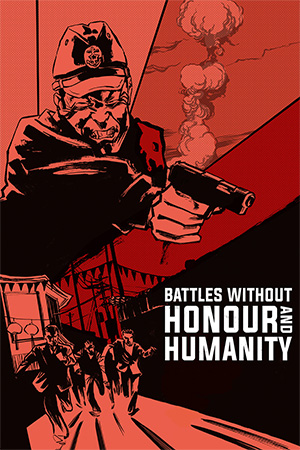 Based on the accounts of real-life mobster Kozo Mino, ‘Battles Without Honour and Humanity’ recounts the first ten year of an epic yakuza war that rumbled on for three decades in the devastated city of Hiroshima and the surrounding areas.

With this film, his breakthrough movie in Japan, director Kinji Fukasaku slew the myth of criminal respectability, depicting the yakuza underworld as a snake pit of treachery and deceit.

Shozo Hirono (Fukasaku main man Sagawara) is a demobbed soldier surviving on his wits in the bombed out ruins of Hiroshima. Sentenced to twenty years inside for killing a yakuza boss, he gains early release by helping a mid-level criminal in a parole securing suicide attempt. Once out Hirono becomes accepted into the Yamamori gang, but when a feud ignites with the Doi organization, Hirono begins to question his loyalties. As the war rages, within the Yamamori group may be where the real danger lies.

An antidote to the rose-tinted yakuza films of the 1960s, Fukasaku’s jitsuroku rosen (greater realism) yakuza films depicted these men as inherently venal and murderous. In ‘Battles Without Honour and Humanity’ bosses promise their soldiers the world yet bleed them dry, and tit-for-tat killings punctuate the story in a battle caused by fuzzy motivation and ending (in the first film at least) in an uneasy truce.

With a lavishly mounted period setting, multiple characters, location filming and enough firepower to re-fight World War 2 Fukasaku’s movie is certainly explosive, with points to make about post-war Japan being an ideal breeding ground for a criminal underworld to flourish, and tellingly splashing the film’s title across Hiroshima’s mushroom cloud. Elsewhere, the US military’s purchasing of black market arms to aid the Korean war effort enables the Yamamori group to expand into all areas of society and influence governmental procedure.

Stylistically Fukasaku is indebted to The Godfather, offset by Spaghetti Western-style bloodletting including some outrageous dismemberments, and “signing” each murder with a trumpet theme borrowed from Ennio Morricone’s score for ‘The Sicilian Clan’.

What prevents Battles Without Honour and Humanity from being a true masterpiece is its confused, muddled plot. The basic story is simple enough, but Fukasaku cannot keep up with the multiple characters blazing through his film, creating long stretches where the audience literally loses the plot. Fukasaku’s trademark on-screen titles and documentary style narration fail to keep the story coherent here, and the film becomes a selection of astounding, yet barely held-together set pieces.

The runaway success of this film in Japan led onto four sequels Fukasaku breathlessly produced in two years, that told the whole sordid tale and left no doubt that yakuza were never “men of honour”.