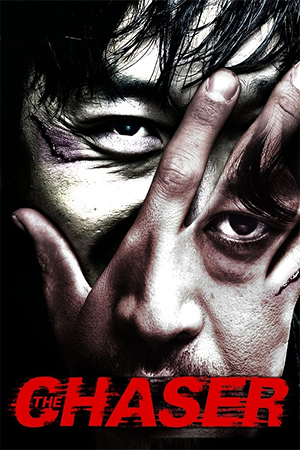 ‘The Chaser’ hits hard and rarely lets up. An original slice of Korean cinema, this serial killer thriller reinvents and rejuvenates the genre and is one hell of a debut film from writer and director Hong-jin Na. Joong Ho (Yun-Seok) is a former detective turned pimp. Just recently several of his girls have disappeared mysteriously. When one of his best girls, Mi Jin (Yeong-Hee) also fails to return from a job he decides to look into the matter himself. Thinking they have all done a runner, he soon discovers they have all disappeared after going to see a client whose phone number ends in 4885. With this meagre clue he sets out into the night to find Mi Jin and after a series of fortunate coincidences finds the deadly 4885, captures him and takes him into police custody. But this is just where the fun, or the horror to be more exact, begins.

Without going into too much detail as knowing as little about ‘The Chaser’s plot is beneficial to a first time viewing, Hong-jin Na’s film completely turns the conventional serial killer/cop drama on its head. The first 30 minutes or so are brutally tense and nerve shredding as the race to find Mi Jin before she is killed is on. They could easily be the last minutes of any conventional serial killer flick and you wonder where the film is going to go after this. Well it takes you on one hell of a dark trip as Joong Ho, the cop turned pimp, tries to convince everyone (including the police) that 4885 is actually the killer. His arrogance and bull headed nature do him no favours in trying to convince people he is not lying and the sheer calm and genuine evil that 4885 (the amazing Jeong-Woo) displays doesn’t help matters. We know he is the killer, Joong Ho knows he is the killer but through calmly admitting and denying the murder and then generally twisting around what is real and what is not, 4885 sends everyone on a wild goose chase. And then things get even crazier. Coincidence and some severe police ineptitude play a big part in what goes one but as in life, sometimes things happen or are solved by a mere chance, a factor that helps to imbue ‘The Chaser’ with fantastic cinematic tension.

All the cast are excellent, especially the three leads and it’s a testament to the Hong-jin Na that we come to care about Joong Ho as he really isn’t a sympathetic character despite being the closest thing we have to a hero. There is also an amazing performance from a young child actor who plays Mi Jin’s daughter, one of the few uncorrupted souls in the film, and shows that not all kids in movies are annoying little moppets. Tension is the name of the game here with Na Hong-Jin orchestrating several electrifying set pieces, not least a scene set in a dirty bathroom and involving the drastic use of a hammer and chisel. But despite the violence and blood, ‘The Chaser’ is not packed with gore more concerned with the dark side of humanity. The reason the killer kills is never fully explained either, the common idea that he is impotent therefore mad at women so kills them, given as a possibility but really just an excuse for the cops to have a reason to hold him. Police ineptitude plays a big part in the film as well, the murder case apparently based on real events. The director obviously has something to say about the police’s lack of professionalism as they are often shown being encouraged to fabricate evidence in order to pin the murders on their suspect. This may be the film’s only downfall as maybe a little too much time is spent on the police ineptitude and some ma also find the notion of coincidence hard to buy.

Other than that, ‘The Chaser’ is a true gob smacker. You may figure out the ending but the emotional impact is never lessened and will stick with you for some time afterwards. If Hollywood ever remakes it (which they will), there is no chance in hell they will keep what happens in the final third. A gripping often emotional rollercoaster of a thriller, ‘The Chaser’ isn’t just one of the best Korean films of the year but one of the best films of the year.