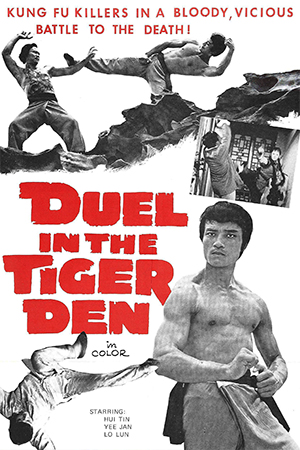 A tyrannical warlord resides over his mini-kingdom at the top of one of China’s mountains aiding by his private army. In his possession is a valuable relic that is the envy of many of the nearby inhabitants and is well-guarded by his warriors. However, one day two strangers manage to climb the mountain and almost steal the relic from the warlord; both of them have their own private motives yet both are willing to combine to beat their foe. Into this plot comes another interested party who decides to help the pair and even up the incredible odds their faced with. The motives are gradually revealed as their objective gets nearer to completion and the warlord looks to be facing defeat.

The instant plus point that ‘Duel In The Tiger Den’ has in its favour is that it is part of Brentwood’s great value ten film pack. It also uses dubbing that sentimental fans like myself will always associate with the Shaw Brothers’ films and therefore anticipate hearing. Perhaps it speaks volumes for the film when it is stated that these are the only two positives to emerge from the production. ‘Duel In The Tiger Den’ is the kind of early-70s kung fu drama that created all of the stereotypes that genre buffs will always despise. A poor script, uninvolving direction and some tepid fight scenes combine to test even the most forgiving viewer’s patience. Unfortunately it never descends into the curiosity value that the ‘so-bad-they’re-good’ films can offer; therefore it simply infuses the audience with a complete sense of indifference. Early-70s martial arts cinema was never usually known for its choreography, but here the action is laborious and gets stuck into this rut all the way until the end. The one saving grace is the dubbing that has a nostalgia quality for myself, but outside of this unusual positive point there’s little to recommend.