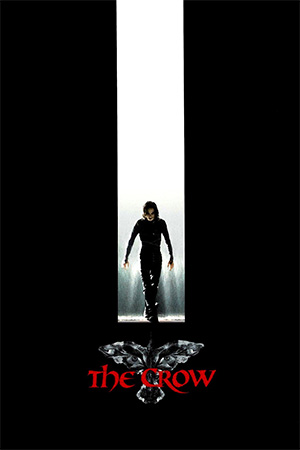 “People used to think that when someone dies, a crow carries their soul to the land of the dead. But sometimes… just sometimes, the crow brings that soul back to set the wrong things right.”  When rock star Eric Draven (Lee) and his girlfriend Shelley Webster are brutally murdered, this prophecy comes true and Eric is brought back to life exactly one year later.  However, his only purpose is to reap bloody revenge on the men responsible for taking away his life and his love.  One by one, Eric seeks out the gang responsible who all seem blissfully unaware that this night is likely to be their last on earth!

On an opening and somewhat sad note, one cannot view ‘The Crow’ without knowing that it was to be was Brandon Lee’s final film after he was tragically killed in an on-set accident. It has to be said however, that it can also be labelled as his finest film and it leaves behind an extremely proud legacy.  Utilising James O’Barr’s comic book as its source, ‘The Crow’ is an extremely dark tale of revenge and a lost love that is a superbly crafted with an engrossing story, larger-than-life characters and some top notch action.  Although deviating from the book slightly, it is still a relatively accurate representation with the atmosphere spot-on and numerous memorable lines re-enacted perfectly.  Lee’s performance is the guiding light though, as he utilises his theatrical background to constantly captivate with razor sharp dialogue delivery that really amplifies what an immense talent he really was.  The action featured is also of a very high standard. Although not martial arts based, there is a hint of Brandon’s influence and it certainly makes for some interesting duels.  On the whole though, its the heartfelt story that shines through, connecting with the audience on numerous levels and making them root for the anti-hero as he reaps his bloody revenge on those that have wronged him.

‘The Crow’ is an excellently constructed and heartfelt action movie that contains a brilliant central performance.  Sadly, the majority of people choose to remember it for the loss of Brandon Lee, but I prefer to think of it as a fitting tribute to an immense talent.  If I am ever pushed to make a list of my favourite films, then this movie will definitely feature.