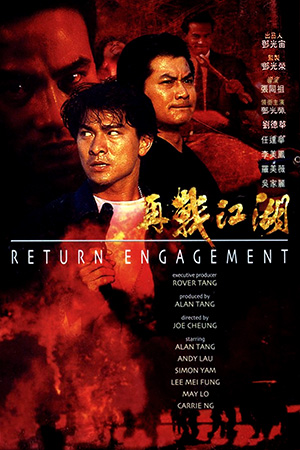 Following a failed attempt on his life at the family’s Vancouver home, which results in the death of his wife (Carrie Ng), triad boss Lung Ho Tin (Alan Tang) takes the law into his own hands, gunning down his Italian mafia rival publicly. Committed for murder, Lung serves twenty years of his sentence before parole and a new life waits. Foremost in his mind on release is tracking down his daughter, who was spirited away to Hong Kong on his imprisonment. Meeting up with old colleagues a successive attempt on his life is thwarted by young triad Wah (Andy Lau) and the two bond as friends before Lung departs for Hong Kong. Once in the Crown Colony he befriends nightclub owner Tsin Siu Fung (Elizabeth Lee), who suggests that one of her girls, Little Lung (May Lo), may know the whereabouts of his daughter.

Once Lung meets up with Little Lung, he sees within the reckless teenager the ghost of the daughter he never knew (with whom she shared an orphanage dormitory) and the two form a surrogate father-daughter relationship. Former colleague Uncle Hung (Ku Feng), head of a dominant local triad, also comes to Lung’s aid and offers his fire-brand protégé Li Pang (Simon Yam) as supplementary assistance. But while Little Lung drags the middle-aged ex-gangster around the city in search of his missing offspring, tempers are flaring within Hung’s organisation. Eventually the situations boils over and Lung finds himself thrust back into the life and facing a dangerous new opponent, the unscrupulous and brutal Li Pang, in what may just prove one final fight for his life.

Under the banner of his own production company, In-Gear Films, at the age of 41, Alan Tang (1946 – 2011) reinvented himself as a latter-day action hero during the second-half of the eighties and following on from the influential success of John Woo’s ‘A Better Tomorrow’ (1986). Whilst not as polished as his previous collaboration with director and screenwriter Joe Cheung, ‘Flaming Brothers’ (1987), ‘Return Engagement’ (1990) is cut from much the same cloth as many gangster films of the era but differentiates itself with a stronger core storyline. Whilst much more of a straight drama than their previous exercise together, ‘Return Engagement’ is still given over to the occasional flourish of ballistic excess that made the gun-toting Hong Kong gangster such a phenomenal success with domestic and international audiences alike. But its backbone lies within its central narrative of Lung’s (Tang) introspective soul-searching and road to rehabilitation as well as his frustrated and failed attempts to reconnect with his missing daughter.

Tang shows here that he was still more than capable of carrying a film on his own with a subtle, measured performance bereft of the bluster and bravado that made his star turn in the previous ‘Flaming Brothers’ so memorable. There is simplicity and warm within the character that Tang paints, and he elicits strong sympathy in his portrayal of a man determined to make amends for his past mistakes yet destined to repeat them solely because of who he is. Future Mrs. Jacky Cheung, May Lo, of ‘Devoted to You’ (1986) and ‘The Last Blood’ (1991), makes for the perfect opposite to Tang’s sombre ex-gangster, giving lots of life and vitality to her character. Though the fate of Tang’s errant daughter is telegraphed well in advance, the interplay between him and Lo is what gives the mid-section of the story its engaging heart. The growing mutual respect, as well as surrogate father-daughter relationship, plays out warmly and believably.

On the opposite side of the fence is Simon Yam as primary antagonist Li Pang, and it goes without saying that Yam is at his scenery-chewing best in one of his first major villainous roles. Yam plays Li larger than life and morally bereft in his lust for power, indifferent towards killing his own people or women and children if it means expediting his path to the top. Andy Lau, per his onscreen credit of “friendly guest” is exactly that, appearing briefly in the first act and again at the finale when Tang calls on the Vancouver boys to come and help him out with the Li Pang situation. Tang’s Hong Kong benefactor, and guarded love interest, Elizabeth Lee as Tsin Siu Fung is (sadly) left the “flower vase” role, per genre archetype, but still manages to add a little colour to her minor character; that, it must be said, becomes more the bargaining tool and all-purpose punching bag as the film rolls on to its inevitable and raucous conclusion.

Although essentially a straight-forward drama in its structure, ‘Return Engagement’ is not without its infrequent, and memorable, punctuations of stylised and over-the-top violence as one would anticipate of the genre. Employing the services of action choreographers Benz Kong, Stephen Tung and Tony Poon, Tang and Cheung run their narrative to the often (almost) surreal excesses that the genre was renowned for. Though the mid-section of the film gives its audience the necessary breather that feels almost mandatory after the opening act’s succession of gunfights, it is merely an extended yet welcome calm before the storm of the magnificently ridiculous climax. In a (screen) world where guns never run out of bullets and bad guys seem to have hundreds of henchmen on their payroll, the final confrontation between Tang’s rag-tag bunch and Yam’s small army plays out for a solid ten minutes of screen-time with more ammunition expended than some wars. Oddly enough, Violet Lam’s score is perhaps the most forgettable element of the whole venture, being restrained electronic textures under the drama and action that almost flitter by without notice.

Due to its dramatic core, which is the focus of director Cheung’s screenplay, many would undoubtedly perceive ‘Return Engagement’ as one of Alan Tang’s lesser late-period ventures. But that dramatic core is its major strength, and one that gives Tang plenty of opportunity to deliver a markedly restrained and nuanced performance that displays his capabilities and versatility. Admittedly, it’s not the marvellous return to the big screen that ‘Flaming Brothers’ was before it, nor given over to the lighter tone and comic-strip excess of Tang’s successive ‘Gun n’ Rose’ (1992) or ‘The Black Panther Warriors’ (1993) but it remains a fine, sometimes excessively violent, film nonetheless. And its strong emotional heart is what sets it apart as well as helped it stand the test of time.

Footnote: Many sources have cited Wong Kar Wai as screenwriter on this film, as he worked as an in-house writer for In-Gear Films during the period. However, the Chinese credits of the film offer no such confirmation of his involvement (Director Joe Cheung receives sole screenplay credit). Wong himself has stated previously that he worked, uncredited, on as many as fifty scripts at the time. It seems highly unlikely, especially with a box office hit (‘As Tears Go By’, 1988) under his belt two years prior, that Wong wouldn’t be credited for ‘Return Engagement’s screenplay if he was directly involved with it. Thereby I have left Wong Kar Wai, and his alleged involvement, completely out of the equation; being that there are no verifiable (or accurate) sources to confirm that he did in fact write for the film at any stage of its production.