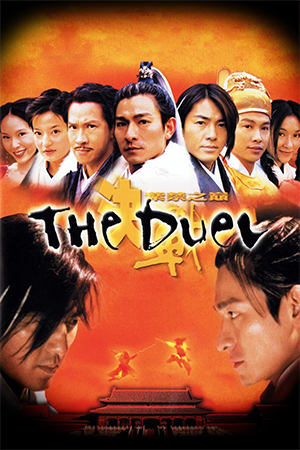 Although ‘The Storm Riders’, ‘A Man Called Hero’ and ‘The Duel’ are stand-alone films, the three have often been grouped together as an unofficial Andrew Lau ‘trilogy’. All three are well known for their extensive use of computer effects and wild fantasy action, but whereas the former two are fairly stern dramas, ‘The Duel’ adds a significant amount of comedy to the mix. This proves to be a good and a bad thing as will later be mentioned.

The martial world holds two swordsmen up as the greatest in the world: Snow (Cheng), the powerful, stoic master who is shrouded in mystery; Yeh Cool-Sun (Lau) an impressive swordfighter who is distantly related to the royal throne. After years of enhancing their formidable reputations, the time comes for the two to hold a duel to finally decide who is the finest in the land. The date of the duel is set as is the location – the walls of the Imperial Palace – and the whole of China is eager to see the contest. Given the responsibility of issuing official attendance medals to those deemed worthy is government agent Dragon 9 (Cheung). As the eagerly-anticipated day draws near, a series of murders occur that turn events on their head. Dragon 9 begins to piece together a plot to kill the emperor, but the identity of the person or persons involved remains hard to discern. However, as various suspects and those with information are not surprisingly killed, Dragon 9 faces a race against time to find the would-be assassin before the duel takes place.

Andrew Lau’s usual productions are perceived to be humourless visual feasts, but this is something that ‘The Duel’ attempts to rectify in its casting. Nick Cheung (looking fairly ridiculous with dreadlocks and pencil moustache) – the star often hyped to be the next Chow Sing Chi – is cast as the leading man and injects his usual wisecracking humour to the proceedings. Cheung lacks the well-defined comic persona that Chow Sing Chi has and can often be far more annoying than entertaining, but here his presence is strangely welcome. While Andy Lau and the barely seen Ekin Cheng play their parts with as little emotion as possible, Nick Cheung at least enjoys lampooning the straight-faced drama of the film. The lighter moments of ‘The Duel’ make a pleasant change from the two special effects hits that Lau produced before this. However, the problem is that the film is very much a hybrid effort and the comedy is ill at ease with the heavy drama that occurs later on. Therefore this never gels in the way it could have done and the overlong duration, featuring a needlessly long ending, verges on tiresome melodrama. In ‘The Duel’s favour is the superior computer effects that appear in the action sequences; the fantasy sequences are one of the film’s major assets and leave the viewer wanting more. With a clearly impressive budget and a star-studded cast, it is to be expected that the film is padded out and not always as engrossing as it should have been. ‘The Duel’ , though, is nonetheless a big-budget spectacular that mostly entertains.