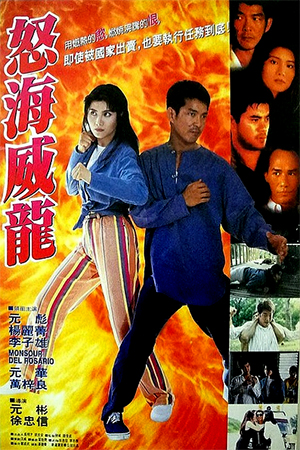 Mainland Officer Yiang (Khan) is on the trail of Wai (Lee), the high profile leader of a money counterfeiting scheme. Wai persistently evades the long arm of the law due to his men’s unfathomable loyalty but the Police are handed a loophole when it turns out that his wife is currently in prison in the Philippines.  Yiang goes undercover to befriend her in the hope that it will lead her to Wai and during her time inside she is given a contact by the name of Li (Biao), a Hong Kong policeman who poses as her husband to keep up the facade.  When Li helps to free the two friends, all goes according to plan and the undercovers become members of Wai’s gang, running various errands for him whilst supposedly hiding from the police.  When it becomes apparent that there is a man behind the man, the two officers must use all of their wits to avoid revealing their identities and try to bring the entire ring down.

Sporting one of the silliest movie titles known to man, ‘Tough Beauty And The Sloppy Slop’ is essentially a low budget clone/rip-off/cash-in of Jackie Chan’s 1992 action flick ‘Police Story 3’. The movie includes a number of similarities in both plot and tone, and you can clearly see that it was cobbled together with the minimum amount of effort. Luckily though, there are still several recognisable faces in amongst the cast who go a long way to improving the production. Yuen Biao and Cynthia Khan are probably the most obvious, and the pair do forge a decent on screen chemistry that provides some suitably amusing exchanges. However, it’s also worth noting that there are some fine cameos from the likes of Billy Chow, Waise Lee and Yuen Wah.

The real highlight of ‘Tough Beauty And The Sloppy Slop’ though, is undoubtedly the action scenes. While they certainly aren’t the best the genre has to offer, there is a good mix of martial arts and gunplay to keep you entertained. As is often the case, a lot of the best bits come from the hugely talented Yuen Biao but there are also a few highlights that emerge from Cynthia Khan. However, I’d have to say that Billy Chow is the cream of the crop as he gets an extended appearance as the final opponent. He showcases his typically impressive bootwork to great effect and provides a fitting conclusion to a solid collection of action set pieces.

‘Tough Beauty And The Sloppy Slop’ is a blatantly cheap production, but it does have a little old school charm that makes it far more appealing than you would expect. It also features a very strong cast of fan favourites who provide some noteworthy moments of action.