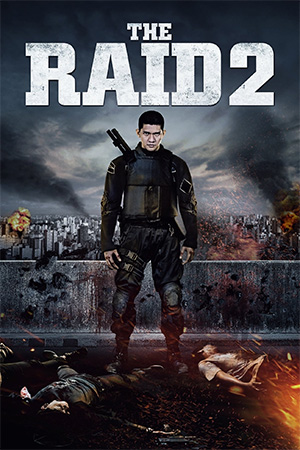 We all know the original ‘The Raid’ was grade A awesomeness: a perfect blend of tension, momentum and blistering action. It put director Gareth Evans on the action movie map and he follows up his genre busting classic with a sequel that continues and expands, and in certain cases, elevates the story of Rama and his continuing fight against corruption to near epic heights. Beginning mere hours after the climactic ending of the original’s tower block siege, Rama (Uwais) is whisked away by non-corrupt cop Bunawar (Simbara) and put under protection. Learning the fate of his brother Andi, that his family may be at risk and that due to the slaying of gang boss Wahyu, the police now have a chance to bring down the corrupt police and the two crime gangs they are in league with. Reluctantly taking the case, Rama goes undercover in a maximum security prison in order to get close to and gain the trust of Uco (Putra) the son of gang boss Bangun (Pakusodewo): the head of one of the two ruling crime families. Left on his own to survive and for much longer than originally intended, Rama gains the trust of Uco (after much brutality) and upon release is welcomed into the crime family. Collecting evidence against the family, Rama finds himself thrust deeper into the criminal underworld not least when Uco gets thoughts above his station and forms an alliance with burgeoning wannabe crime kingpin Bejo (Abbad) leading to excessive amounts of violence and betrayal.

Attempting to condense the narrative of ‘The Raid 2’ into a single and concise paragraph is a feat in itself: this is a truly epic film that builds and builds into a multilayered crime saga. ‘The Raid 2’ may go in a different direction with a new style compared to the first film but is still just as ambitious and action soaked as the original and shows director Gareth Evans’ talent blossoming into something near euphoric. With its two and a half hour run time, this sequel paces its action sequences throughout the runtime rather than having the continuous feel of non-stop action that the first film had. This gives Evan the time and chance to flesh out his characters and construct a larger story as Rama finds himself cut off from his family and pitted against two crime empires. For the most part Evans crafts a riveting and very dark saga with a wealth of characters that though occasionally buckles under its own weight and length (and there is a notable chunk of time when Rama is regrettably absent from proceedings) manages to grip thanks to a mixture of superb performances, building tension, striking cinematography and large scale action.

Wisely tying up a few character threads from the first film, Evans then jumps straight into building a crime chronicle with a surfeit of characters with varying intentions and allegiances, meaning concentration is in order to follow the various plot strands. The main thread of the son of a crime boss wanting his own shot at glory but being denied it may not be the most unique  take on the crime genre but is given extra depth and bite thanks to the fantastic performances and that we, the viewer, have Rama to guide us through this dark labyrinth underworld. The building hate between Uco and Bangun may be drawn out a little too much and given too much focus (meaning Rama’s undercover operation gets sidelined somewhat) but Evans knows when to bring Rama back to the centre of proceedings: not least in the epic finale when Rama resigns himself to doing everything he is capable of to bring an end to all the violence.

For the first half the action is spaced out (so don’t go in expecting non-stop action from the get go) with a creative fight in a toilet cubicle, a fantastically shot muddy prison brawl and an insane shoot-out in a porn den (!). Then Hammer Girl and Baseball Bat Guy show up: and all hell breaks loose. When these two show up (and administer violence with said weapons with aplomb!) along with another bad guy/martial arts whizz simply called The Assassin (Rahman), ‘The Raid 2’ ultimately reaches a level of action, violence and exhilaration only equalled by the original. Evans then delivers the set-pieces with frequency and a growing sense of urgency as everything begins to unravel for the various characters. From the violent fights featuring Hammer Girl and Baseball Bat Guy, to the incredible car chase you’ve no doubt heard about, to the one of the finest one-on-one final fights to ever grace action cinema (high praise and excessive hyperbole indeed but on screen fighting does not get much better than this epic final duel!): the action is fluid, brutal and epic.

The cast are no slouches in the acting department either with pretty much everyone standing out at some point. If performances are to be singled out then it is Iko Uwais as the desperately- trying-to-survive Rama and Arifin Putra as the thoroughly despicable Uco that really shine. Uwais has come a long way since ‘Merantau’ and his Rama is central and vital to the success of ‘The Raid’ franchise. As mentioned he does get sidelined a little but is still front and centre when it matters and Uwais infuses Rama with a real sense humanity. Bulked up and shaven headed this time around, he becomes a one man force desperately trying to set things right and get back to his family. Likewise, Putra is absolutely incredible as Uco and almost steals the film. Capable of extreme violence and boiling with rage underneath his suave exterior, Putra never deteriorates into pantomime villain and makes Uco one of recent cinema’s most memorable antagonists.

While sometimes over indulgent (that throat silting scene) and not quite as good as the first instalment (at least to this reviewer: as that film has the perfect blend of tension, surprise, mood and relentless action), ‘The Raid 2’ is still an incredible achievement (with a smart balance of character, story and action: and there is certainly many of you out there asking for this – well here it is!), a staggering action film and, well, just plain essential cinema.