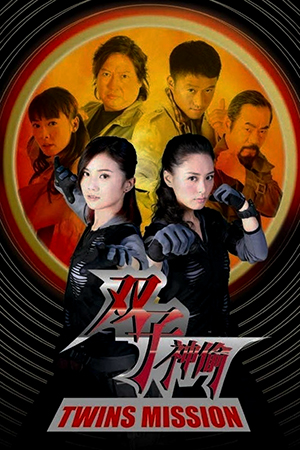 The good news is that the Hong Kong Sugar Glass Association saw their profits increase ten-fold thanks to the carefree use of the popular stunt aid in this New Year action offering. The bad news is that, despite the joy of seeing a variety of performers get thrown through a veritable cornucopia of windows and mirrors, this is the kind of lacklustre production we’ve become all to familiar with in recent years.

Hong Kong’s favourite pretend twins once again appear as siblings, perhaps in the hope that another on-screen outing together will finally see them fused together as one all-powerful being. Though that doesn’t quite happen here, Charlene and Gillian contentedly play sisters Pearl and Jade whose acrobatic excellence is the cornerstone of a Chinese circus troupe. Little do they realise that their inherited skills are closely linked to their father’s activities with a famed group of outlaws who roam the land righting wrongs while pocketing a little for themselves. The father (Wah) returns to his daughters to seek their help in locating a Tibetan artefact stolen by his evil twin brother and eventually persuades the reluctant duo to join a motley crew of enforcers entirely made up of twins.

Starting with a fairly well presented action scene in a train carriage, ‘Twins Mission’ quickly losses whatever impetus it had a settles into another moribund attempt to turn back the clock to an era of Hong Kong cinema now sadly lost forever. It takes more than just a few competent fight scenes to turn back the clock and director Benz Kong tries to fill the gaping holes with supposed tension and pathos. As with so many films that try to balance these elements, this ultimately proves to be the undoing of the work. ‘Twins Mission’ has that annoying pseudo-dance soundtrack that so many Hong Kong films today think signifies ‘energy’ and ‘vibrancy’, but this awkward feature moves like a mime artist trying to walk on a sea of molasses.

Benz Kong is never quite sure if this is a vehicle for Twins or Jacky Wu and therefore the story attempts, quite unsuccessfully, to work to their respective strengths. In the case of the former, it is a mixture of cute charm, loving camera shots of the two beautiful stars and camaraderie while the latter excels in fast-paced fight action. These two camps need not be to the detriment of each other as Hong Kong’s 80s boom showed, yet ‘Twins Mission’ is a very unstable attempt to fuse these elements together. Twins fans are likely to be slightly better catered for here as Jacky Wu still struggles in his moments as the leading man, but neither party are likely to whoop with delight over the end product.

‘Twins Mission’ is a messy affair with a few bright spots to help the 90 minute running time ease past. The lack of obvious direction proves to be the ultimate hindrance to what may have been a moderately interesting big budget action film, added to the fact that the style-over-substance trend so prevalent in the past decade still gnaws away at this Hong Kong production.