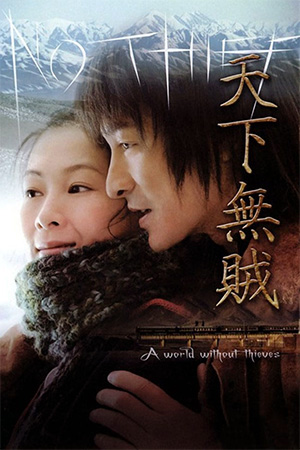 In the space of just a few months at the end of 2004, Andy Lau made two films that examined that age-old story of the master thief. ‘Yesterday Once More’, while a reasonably big success in Hong Kong financially, was a pallid, superficial production that featured characters with so little appeal that the overall film collapsed in the middle. Meanwhile, Feng Xiaogang’s attempt at a deeper look at thieves and morality, ‘A World Without Thieves’, sank without a trace in Hong Kong, but chalked up an impressive gross in its native China. Whether this indicates that the Hong Kong populace have little interest in the earthy, more ambitious productions of their Mainland cousins has been debated, but there’s no doubt that the two films tackle their subject in very differing ways.

Wang Bo (Lau) and Wang Li (Liu) are two wily thieves who are partners in crime and in romance. Using their various skills to trick and extort money from a wealthy, but odious Chinese businessman, they head into the Chinese wilderness to plan their next move. During the journey, Li announces that she wants to dissolve the partnership and is feeling particularly guilty about their long life of crime. The indignant Bo leaves her in the wilderness and drives off to further his own dubious career. Coming to her rescue is a guileless young worker nicknamed Dumbo and his sheer wide-eyed innocence leaves an impression on the contemplative Li. Dumbo has saved his earnings as a craftsman to return home, marry and build a house and heads off to catch the train across China, despite his colleagues warnings about the various thieves that infest the land. Li decides to act as his protector and gain some measure of redemption. On boarding the train, Li and Dumbo meet Bo who has followed his old partner throughout her travels and is very eager to get his hands on Dumbo’s savings. Also making the long train journey is a band of master thieves lead by enigmatic, idiom-spouting Uncle Li who are also alerted to the possessions of the innocent traveller.

While ‘Yesterday Once More’ presented its two criminal leads as some kind of opulent superheroes, ‘A World Without Thieves’ gives a far more realistic and damning account of this ‘profession’. Feng Xiaogang doesn’t try to turn his characters into people we, the audience, should be in awe of; his approach shows all of the dishonest and duplicitous battles that are constantly fought among them. Though Bo and Li are shown with their ill-gotten gains, the director is careful not to make the mistake that Johnnie To made when he presented two unpleasant lead characters with a kind of lifestyle we were meant to envy. For this more introspective look at the theme, Feng Xiaogang deserves at least some credit.

Saying that ‘A World Without Thieves’ is a far more capable film than ‘Yesterday Once More’ is hardly saying much though – it’s a bit like saying that a slap in the face is better than being shot by a crossbow. Indeed, this production has flaws of its own which, although not quite as obvious as Johnnie To’s lazy production, still hamper whatever hope there is of this being a first-rate success. Initially there is a solid theme to the film, with the message of redemption and the contrast between the purity of Dumbo and the shady individuals that surround him making for an enticing examination. Eventually, ‘A World Without Thieves’ gets a little too absorbed in its crafty villains and their constant battles to make a deeper impression.

For the first half of the film, the juxtaposition of Dumbo and the thieves has a pleasing tone that actually commends the innocence of the reluctant hero. While his complete trust in everyone around him seems a tad too overplayed, Feng Xioagang does have an admirable respect for his pivotal character. Dumbo’s description of the honesty of his home village is a touching contrast to the scurrilous Uncle Li and his cohorts. Though Dumbo is an obvious tool to signify vindication and a means for Wang Bo to show her own change of heart, it works quite adequately for the film-maker’s needs.

As the film heads towards the hour mark though, the whole theme it had painstakingly set up is dismantled and the remaining 50 minutes becomes an empty series of repetitive tricks. There’s only so many times that Dumbo’s stash can be stolen and replaced without a distinct feeling of disinterest creeping up on the viewer. Dumbo, as a character, gradually disappears from the narrative and it is left to Bo and Uncle Li’s employees to exchange pointless displays of talent and bravado. Feng Xiaogang also becomes over-absorbed with the kind of flashy, quick edit slow motion that has made fools of countless directors. A well told story with crafted characters will always show a director’s credentials far better than these empty tricks.

‘A World Without Thieves’ also suffers from having to rely on characters who produce little empathy even though they’re evidently meant to. Wang Li is primarily shown as a woman whose redemptive actions towards Dumbo would appear to show a genuine change of heart; eventually, though, Li’s change owes more to a gnawing self-pity than any genuine care for Dumbo. This is certainly unintentional, but it still resonates fairly powerfully at the end. Meanwhile Wang Bo is shown as a thoroughly selfish individual who is then ‘redeemed’ by some closing actions; such a change from the threatening, self-interested criminal to the altruist is romanticised, but never sympathetic.

One area where the film excels is the visual power it transmits. Despite some poor-CGI, the cinematography is luscious as is the sumptuous Chinese landscapes. Even in the confines of the train – where most of the story takes place – there is a visual glow that imbues the production with a certain elegance. Wang Liguang’s musical score also dovetails nicely with the epic vistas that the drama is played out against. Although there is a lapse into a series of Mandarin ballads that add little potency to the story, the sweeping score that permeates most of the film is a major asset.

‘A World Without Thieves’ is entertaining, but never fully achieves what it aspires to. Andy Lau and Rene Liu in particular acquit themselves well with their roles, as do the varied supporting players. Nevertheless, this is a lustrous production that flatters to deceive, aiming for the intellect, but eventually preferring to show empty spectacle and supposed depth.