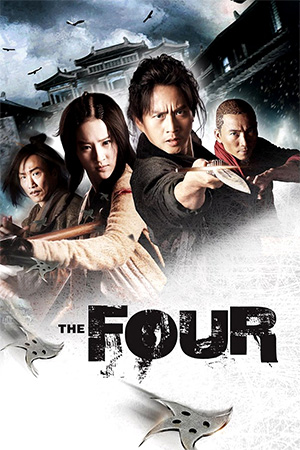 This slick and visually impressive fantasy effort written and co-directed by Gordon Chan (‘Fist of Legend’, ‘Painted Skin’) certainly looks the biz and comes alive when the zippy action scenes burst on the screen but overall ‘The Four’ is a rather lacklustre affair that despite its best efforts and good pedigree just never takes off. A somewhat convoluted story doesn’t really help matters as it kicks off the film in a confusing manner as many characters, police divisions and plot threads vie for screen time in rapid succession. It goes something along the lines of: the Divine Constabulary (made up of four agents with special powers under the leadership of Anthony Wong) is a secretive organisation that report to the Emperor and are on the case of an illegal currency scheme. Also on the case are Department Six, an elite law enforcement group who don’t take too kindly to the Divine Constabulary’s inference. On top of this there are various assassins, hidden agents, agent to agent relationships and other nefarious schemes thrown into the mix and struggling for screen time making ‘The Four’ a rather heady mix of plots, subplots and escalating amounts of characters.

After the first twenty minutes or so, the above all settles down for the most part meaning proceedings are easier to follow but the overall storyline does get bogged down in, well, just too much happening. And unfortunately a lot of is not that interesting. The counterfeit currency plot strand doesn’t really give the plot the tension it needs, the Divine Constabulary agents all get to flex their individual powers but it never really feels that special and is nothing we haven’t seen before in other fantasy type flicks and as everything is introduced at such a rapid rate it makes it hard to care who is who and why they’re doing what they’re doing. In fact, despite the film clocking in at just shy of 2 hours proceedings seem to fly by so quickly, Chan and co-director Janet Chun seemingly in love with fast edits and what seem to be constantly swooping camera movements. When the action does ignite it also suffers from hurried editing: Ku Huan-Chiu’s impressive action choreography rushing by with little time to savour the fantastic flights of combat just witnessed.

It’s not all a write off. Some elements of the story work well, the Divine Constabulary proving to be an interesting concept and eclectic mix of characters that are unfortunately overshadowed by various lacklustre supporting characters. Hopefully they will be further explored and developed in the already planned sequels. Since Chan is no slouch when it come to directing with bigger budgets, ‘The Four’ looks fantastic, the camerawork at times striking (the birds eye view of the Imperial City that opens the film and sees the camera follow several sets of characters is stunning), the production design equally impressive and for once the CGI effects look great and help enhance the fantasy elements (the undead warriors being particularly memorable).

It’s a shame the film just doesn’t connect as a whole. Gordon Chan can certainly do entertaining fantasy action (the underrated ‘Painted Skin’) but the various elements of ‘The Four’ just don’t gel meaning there are moments of fun but on the whole it’s all just a little dreary and long winded. Less critical fans of big budget Chinese fantasy action may get more of a kick out of it though.