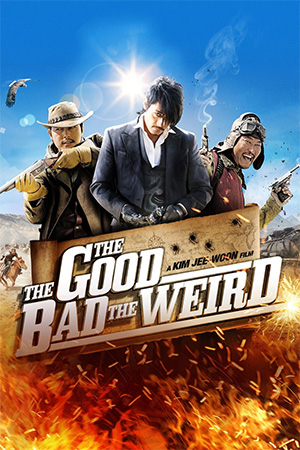 On many levels ‘The Good, The Bad, The Weird’ is what cinema use to be all about: fun. In this day and age of fan boy obsession and critical over analysation it’s great to see a big, loud and proud film wearing it’s sense of fun and aim to entertain so visibly on its sleeve. Korean wunderkind Kim Jee-woon follows up his equally entertaining and accomplished films ‘The Tale of Two Sisters’ and the magnificent ‘A Bittersweet Life’ with a blitzkrieg Western that shows he can handle any genre and is one of the most exciting modern filmmakers today.

The film opens in grand fashion as a train rushes through the harsh, open desert plains of Manchuria and three very different outlaws raid the locomotive looking for a much sought after treasure map. The Weird (Song) is a bumbling thief but a dab hand with his double pistols and simply wants the map to find the treasure, get rich and live the good life. The Bad (Lee) is a pretty boy killer, a merciless outlaw who along with his gang want the map also. The Good (Jung) is a bounty hunter after the pair of them who is less interested in the map but in catching (and even killing) the best outlaws in the land. The three then set off on a cataclysmic course as they try to steal the map from one another, form risky alliances and leave a huge wake of destruction in their path as everyone from the Japanese army to Russian and Chinese bandits take up arms against the trio and attempt to acquire the map for themselves.

Kim Jee-woon’s film is an obvious nod to the Western’s of Sergio Leone, packed full of beautiful vistas, wide shots of the deserts and outlaws squaring up to each other and rip roaring adventure. But this is a distinctive Eastern take on the genre and above all a no holds barred action adventure that is stuffed to the gills with adrenaline pumping set pieces. Having started his career with quirky comedies ‘The Quiet Family’ and ‘The Foul King’ before dabbling in horror (‘A Tale Of Two Sisters’) and gangster (‘ A Bittersweet Life’) movies, Kim Jee-woon has gone all out to create one huge action picture. Setting everything on a grand scale from sets to locations to the amount of extras, ‘The Good, The Bad, The Weird’ (‘TGTBTW’) is epic in every sense. Don’t go expecting a dissection of the Western myth a la ‘Unforgiven’ as ‘TGTBTW’ is much more concerned with having fun; setting good guys against bad guys and then having everyone shoot seven shades of hell out of each other.

The action is relentless and thanks to some bravura camerawork and a rollicking soundtrack endlessly exciting and creatively staged. The actors throw themselves into the mix from the daring robbery that opens the flick to an amazingly staged gunfight in a shanty village (which sees The Good literally flying across the rooftops while shooting bad guys) to the insanely staged, dangerously stunt packed 20 minute desert chase that will literally fry your eyeballs with it’s audaciousness and momentum. It’s great big spectacle, most of it all done for real, that we don’t get anymore. In addition, there is also the staple cowboy showdown and an extremely brutal knife fight that shows the West (or the East as it may be) at its wild best.

Many will no doubt grumble at the streamlined story and lack of breaks to build character in between all the action but they will be missing out on a huge gun barrel of fun. The film is essentially a chase flick and the plot is fleshed out and works well enough within these confines. The characters are immediately and always engaging and appropriately sketched for this comic book type of film. The three main actors seem to be having a ball and Lee Byung-hun cements his cinema cool credentials with his ice cold role as The Bad. But it is Kang-ho Song who steals the flick with a performance that is as energetic as anything else in the film. A dab hand in the action scenes, his character is an infectious bumbling anti-hero who provides just as much slapstick comedy (all of which works surprisingly well within the Western trapping) and enthusiasm that one can’t help but root for him. The scene where he uses an antique diving helmet to deflect bullets during a shootout is gut bustlingly funny without diffusing the tension of the scene. In fact, despite being a Western and an action film, ‘TGTBTW’ is also a great comedy which adds all the more to the sense of fun.

Some may be disappointed that Kim Jee-woon has followed up two very serious efforts with a more fun affair but that is not to mean ‘TGTBTW’ is any less worthwhile. He is a director who dabbles in all genres and it is always refreshing to see a director doing something different. And films that are purely fun and entertaining have their place in cinema alongside much more worthy and thought provoking cinema. The tone may vary a little too much for some viewers and this is fair enough as a scene of brutal torture (an unfortunate soul getting his finger severed) followed up by slapstick comedy (the aforementioned diving suit bit) may not be to everyone’s tastes. In addition, the post credits epilogue ends the film on a bit of a frustrating note and can be seen as somewhat of a cop out after all the greatness that has come before.

However, ‘TGTBTW’ is a great achievement and another success for Kim Jee-woon and is most importantly big, bright and ballistic entertainment that should be seen on a screen as big as possible. There is a whole lot of good, plenty of weird and very rarely any bad. Korean cinema continues to excite, stimulate and entertain.