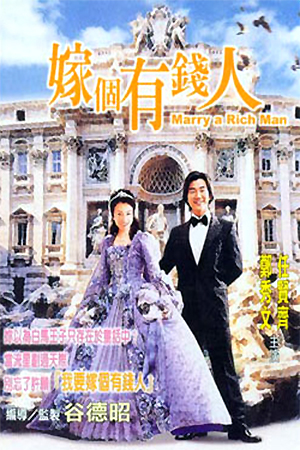 Box-office golden girl Sammi Cheng released ‘Marry A Rich Man’ for the 2002 New Year slot – traditionally a time when the big guns come out with their new productions. Re-teaming her with ‘Summer Holiday’ co-star Richie Ren, ‘Marry A Rich Man’ pulled in a highly respectable figure of over HK$20million, but hardly ignited the imagination. It is therefore easy to report, in retrospect, that Vincent Kok’s film is a romantic/comedy with a smattering of the latter, but a complete absence of the former – as will be expanded upon later.

Though Mimi (Cheng) has high hopes of a fairytale style wedding, her current employment as a bottled gas delivery girl hardly inspires confidence in the future. Mimi is certainly happy with her position in the over-protective village where her father is chief, but she still hankers after a glamorous groom. When she meets a few of her former peers who are now married to successful men, Mimi’s desire grows stronger; this leads her loyal best friend to give Mimi her savings so the lovestruck woman can go to Milan with a pretence of wealth. On the plane, the prospective bride meets charming millionaire  Dan (Ren) who she quickly strikes up a rapport with. As the travel through Milan’s picturesque streets together, the pair inevitably fall in love with each other. However, Dan, like Mimi, is actually masquerading as a millionaire in the hope of ensnaring a wealthy bride. When they return to Hong Kong both Mimi and Dan go their separate ways knowing their quest has failed – the strong feelings they have rise to the surface, though, and the race is on to find each other.

As was indicated, ‘Marry A Rich Man’ is a rom-com film that commits the cardinal crime of not being very romantic. Vincent Kok takes a tried-and-tested coupling and lumbers them with a storyline that is so cynical that it stops any chemistry between the leads developing. The idea of two people whose goal in life is to marry a very wealthy person seems to go against the whole point of the ‘love story’ genre and renders the continuing story uninteresting.

Though it could be argued that Kok has intended a minor morality tale here – the fact that money is not as important as true love – the outworking of this purpose is severely undermined. The audience never really feels empathetic towards two gold-diggers and their blossoming love, while the supporting characters are woefully underwritten and devoid of interest. The whole quota of stars seem to be playing characters who have a cynical edge that is hard to warm to – if we are meant to admire Mimi’s annoying best friend, manipulative father and other villagers than the aim falls flat on its face. There’s only so far that Sammi Cheng’s quirky charm can carry her role; she is an actress who has a limited bag of tricks that all prove redundant here. Vincent Kok tries to add a couple of gimmicks i.e. the allusions to the infinitely superior ‘Truman Show’, but these add little to the overall effect.

‘Marry A Rich Man’ has a few redemptions. These come in the shape of a few good comedic routines, especially the scenes involving Cheung Tat Ming. While they are scant consolation, they do lift the whole film slightly above the two star ratings. The Milan locations also add a level of interest to what is clearly an expensive production – it is, however, the Hong Kong scenes that dominate and they prove to be badly in need of support. Even by the modest standards of Hong Kong New Year movies, ‘Marry A Rich Man’ is a disappointment – I’m perhaps being too generous elevating this to two and a half stars as it is a two star feature for most of its duration.