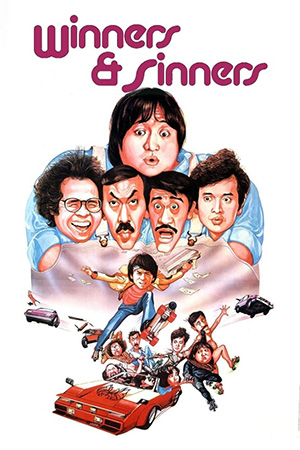 When five hopeless criminals are locked up together, they strike up a friendship that they swear will keep them united forever.  Upon release, they stick to their promise and decide to go straight by setting up a cleaning company under the name ‘Five Stars’.  However, crime seems to follow them around like a bad smell and the gang accidentally wind up in possession of counterfeiting plates that belong to one of the biggest crime organisations in town.  As if this wasn’t bad enough, another rival gang seizes this opportunity to obtain some extra business and decide to go after the plates while they are in “neutral” hands.  With the help of a rogue cop (Jackie Chan), the gang decide to clear their names and attempt to bring both gangs to justice.

‘Winners And Sinners’ is probably best known for being the first movie to introduce the team of actors who later became known as the ‘Lucky Stars’.  While subsequent entries into the series definitely made more of the action sequences (see ‘My Lucky Stars’ and ‘Twinkle Twinkle Lucky Stars’), this original outing is probably better described as an all-round comedy.  Littered with numerous running gags and ingenious set pieces, the film really highlights the abilities of its stars and they forge an instant on-screen chemistry that was really the backbone of the series. As with a lot of 80’s Hong Kong movies, there are also a couple of enjoyably put together stunts and fights, some of which feature cameos from big names like Jackie Chan and Yuen Biao.

‘Winners And Sinners’ may disappoint viewers if they’re expecting to see a Jackie Chan film (especially if you have been sucked in by the international cover art), but if you appreciate the talents of any of the main actors involved then you are definitely in for a treat.  The gags come thick and fast, and the film remains one of the finest Hong Kong comedies from yesteryear.