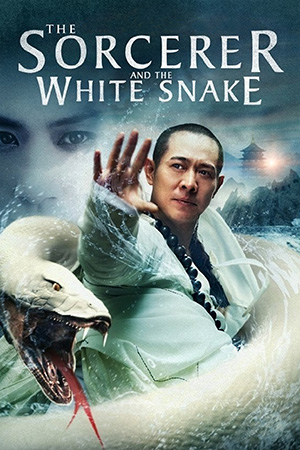 Snake demons Bai Suzhen (Huang Shengyi) and Qingqing (Charlene Choi) live in the forest with other animal demons. One day, Suzhen, in the incarnation of a beautiful lady, falls in love with a young herbalist by the name of Xu Xian (Raymond Lam). With the help of Qingqing, she ventures into the human world and gets married to Xu Xian. In a twist of fate though, Fa Hai (Jet Li), a sorcerer from Jin Shan Temple, crosses path with Suzhen. A fiery battle is about to begin…

‘The Sorcerer And The White Snake’ is the latest retelling of the ‘Legend of the White Snake’, a classic Chinese fable that has often proved to be a popular source of inspiration for opera, film and television adaptations. This particular incarnation is a fairly lightweight affair, foregoing the majority of plot in favour of CGI-heavy action sequences. Although this approach makes the film fairly fun and easy to follow, it does leave the audience somewhat distanced from the integral love story. What we do get however, is a more family friendly outing that fills the running time with silly CGI animals and some harmless but not particularly funny comedy.

As for the cast, Huang Shengyi, now going under her more internationally acceptable name of Eva Huang, does a decent if perhaps somewhat unspectacular job of playing the White Snake. While she is an actress who I think has definite potential, there just isn’t much for her to do here other than play the lovesick puppy. Charlene Choi on the other hand, fairs slightly better as the Green Snake, but mainly because her comedic portrayal of the role makes for a welcome change. Meanwhile, arguably the film’s biggest draw, Jet Li, is little more than window dressing, popping up primarily just for the action scenes or to spout the odd stereotypical monk-ism (“Buddha bless you”, “be gone foul demon” etc.).

Thankfully, the fantasy fights do go some way to making ‘The Sorcerer And The White Snake’ a fairly successful popcorn flick. And when I say fantasy, I really mean it because there is nothing remotely resembling martial arts here. Instead, we get a boatload of confrontations that feature magic, demons, and, most notably, giant snakes, all of which provide some easy-on-the-eye action. Admittedly, the CGI is still fairly amateurish and a little Storm Riders-esque, but it does just about enough to maintain the illusion and those of you not expecting Hollywood standards will appreciate what you see.

‘The Sorcerer And The White Snake’ isn’t going to please you if you are expecting an engrossing or even accurate portrayal of the legend. It is however, fairly tame fun that will easily appease the ADD generation who are hooked on special effects. Go into it with that frame of mind and it’s likely that you’ll find an adequate time filler.