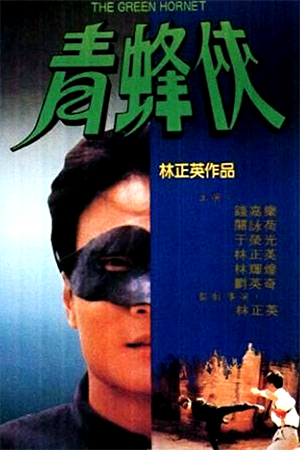 In the hysterical film-making years shortly after Bruce Lee’s death, it was something of a surprise that more exploitation directors didn’t plunder ‘The Green Hornet’ (or more importantly Kato) for their dubious productions. Not only did it have a reasonable worldwide audience, but it also had a superheroic framework that many B-movies would be very well suited to. This reasonably low-budgeted effort was one of the only attempts to create a Green Hornet that could be taken seriously (watch ‘Bruce Vs. Superman’ for proof of this). The result is a very average production, but more of that later.

During the opening credits, Chin Kar Lok as the eponymous hero displays some neat moves that highlights his physical prowess. Dispatching a slave-trading gang who are smuggling children with a barrage of quick-fire kicks and punches, the hero creates a fitting opening for the film. The narrative then settles down to its main focus: the deeds of the Green Hornet – with Kato absent from the picture. While taking part in one such heroic adventure, the Green Hornet attracts the attention of a curious police officer who wants to see who the man behind the mask really is. Therefore the two friendly rivals engage in an ongoing battle to outwit one another while still honouring their respective roles. The main villains come to light for the pair when a group of western mercenaries arrive on a small island and begin creating havoc as they search for some supposed treasures. After picking up an adoring female sidekick along the way, the Green Hornet seeks a way to outwit these trained killers. With plenty of tricks and his formidable aptitude for fighting on his side, the masked man is absorbed in a dangerous game of cat-and-mouse with the ruthless band.

Anyone hoping for an exciting big-budget version of the well-known character will be sorely disappointed by this merely functional cinematic rendition. Those also looking to see the nearly-man Chin Kar Lok finally get the film his talents deserve would also be advised to look elsewhere. While ‘The Green Hornet’ offers a few thrills along the way, for the most part it moves at a very unengaging rate and leaves very little of merit with the viewer by the end. The late great Lam Ching Ying sadly directs this action film with absolutely no sense of excitement – the odd good fight scene is quickly stamped out by this major flaw. The cast sleepwalk through their various roles and lack any kind of enthusiasm for the proceedings; this proves to be infectious as the viewer soon gets stuck in this feeling. Ardent fans of Hollywood will be puzzled by this strange version of ‘The Green Hornet’ (featuring little to tie it in with the original series) and Hong Kong movie lovers will bemoan the lack of quality action and absent atmosphere. If you must see an action film with a masked protagonist, watch Jet Li’s ‘Black Mask’ instead – it certainly proves to be a much more satisfying experience.